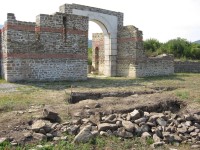 Trajan’s conquest of Dacia, so beautifully immortalized on the column that bears his name, was as immense a construction project as it was a military one. Trajan (r. 98-117 A.D.) built several major roads during his campaigns in Dacia, feats of engineering urged by the military necessity to clear a path for the organized and speedy movement of troops and supplies. The Via Trajana almost bisects central Bulgaria. It started in the Danube city of Ulpia Oescus, today the town of Gigen just south of the Romanian border, then went south through Sostra (modern-day Troyan) and the Troyan Pass in the Balkan Mountains before ending in Philippopolis (modern-day Plovdiv) which in Trajan’s day was in the Roman province of Thrace and is now in southern Bulgaria. The road played an important strategic role in the conquest of Dacia since it provided the army with a vital link connecting the Roman province of Lower Moesia on the Danube Plain with the largest city in Thrace. An even longer road Trajan built, the Via Militaris, intersected Philippopolis going the other way, diagonally from the northwest to the southeast of what is now Bulgaria.

Subsequent emperors maintained and added to the roads, building watch forts and . Along the Balkan stretch of the Via Trajana, Antonius Pius (r. 138-161 A.D.) built a fortress at Sostra in the Osam river valley to garrison the area which is known to have revolted against his rule at least once. Septimius Severus (r. 193-211 A.D.) and Gallienus (r. 253-268 A.D.) built fortresses practically on top of their predecessors’ ones at Sostra. The garrison ranged from 500 to 1,000 soldiers strong at different times, all of whom were housed in long wooden barracks with tiled roofs and well-fed on a diet of domesticated animals, game and mussels from the Osam river.

As so often happened in the Roman empire, a bustling town grew alongside the outpost to take advantage of the security afforded by troops permanently stationed there and the many opportunity for trade. In the 5th century, invading Huns destroyed the fortress and the town which were then left undeveloped. With no subsequent construction to destroy what was left of the Roman structures, the site has proven a rich source of archaeological remains since excavations began in the 1970s. 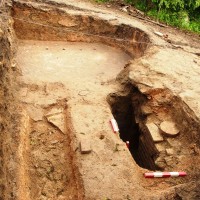 More recently, a team led by archaeologist Ivan Hristov have been excavating Sostra and environs since 2002. They found a stretch of the Via Trajana in 2010 that’s an impressive 7 meters (23 feet) wide and in excellent condition, the best preserved Roman road ever discovered in Bulgaria. Last year Hristov’s team unearthed a Roman road station 5,400 square feet in area with well-appointed facilities including a praetorium — a general or governor’s council/judgment hall — and baths with hot and cold water pools. The baths were fed by brick channels built to carry water from the Osam through the underfloor hypocaust system that heated the water, floor and walls. Coins, jewelry and votive offerings found at the bottom of one of the channels underscores that the people who made use of the facilities were wealthy. This wasn’t a modest public bath for the villagers; it was more like a luxury resort for the well-moneyed traveler.

This year’s excavation has found a furnace used to heat up the water in a shallow pool next to the large swimming pool, much like the small hot tubs attached to the big pools in modern-day resorts. Hristov believes the resort regularly hosted government administrators and may even have been visited by the imperial family when they were in the area.

The Bulgaria National Museum of History plans to apply for National Monument of Culture status for the Sostra road station which will grease the wheels for additional excavation and partial restoration to enhance its potential as a tourist destination.

The new discovery at the Ancient Roman fortress Sostra is expected to help it receive the status of an archaeological preserve including the fortress, the road station, and a large Early Christian basilica together with several other ancient buildings located at the point where the Lomeshka River flows into the Osam River.

As the report puts it, tourists will be able to walk around an entire labyrinth of authentic archaeological structures.