Sweden sees your 17th century gun carriage, England, and raises you a 15th century sea monster. On Tuesday before a crowd of fascinated thousands, divers lifted the wooden figurehead of a late 15th century Danish warship from the Baltic Sea off the coast of Ronneby in southeastern Sweden. The figurehead weighs 300 kilos (661 pounds) and is carved out of the last meter of a 3.4-meter-long beam. The design is a fierce toothy monster of indeterminate nature.

“Last time it looked at the world, Leonardo da Vinci and Christopher Columbus were still living,” Johan Ronnby, professor of marine archaeology at Sodertorn University, said as the ferocious-looking figurehead, which was intended to scare the enemy, was brought to the surface.

“It’s a monster. It’s a sea monster and we have to discuss what kind of animal it is. I think it’s some kind of fantasy animal – a dragon with lion ears and crocodile-like mouth,” Ronnby said.

There’s something in his mouth, too, something or someone being devoured by this fearsome beast. It reminds me of the biscione on the Visconti family coat of arms.

The wreck was first found by sport divers in the 1970s, but archaeologists only learned about it in 2001 when artifacts from the ship surfaced. They took a wood sample from one of the ship’s exposed timbers and dendrochronological analysis revealed the oak tree that made that timber was chopped down in northeastern France during the winter of 1482-83. That means the ship was likely constructed in Flanders or the Netherlands. In collaboration with local divers, archaeologists explored the wreck, retrieving a number of artifacts including nine carriages for iron breech-loading guns which are now on display at the Blekinge Museum. They found that the ship was constructed using carvel planking, with hull planks laid flush next to each other rather than with the slight overlap of earlier clinker-built vessels,

Researchers have identified the ship as the Gribshunden, the flagship of King Hans of Denmark which sank while anchored off Ronneby in 1495. Historical sources report that the ship was on its way to Kalmar, Sweden, where King Hans would meet with the Swedish regent Sten Sture the Elder to discuss Sweden’s increasing withdrawal from the Kalmar Union. For unknown reasons, the ship caught fire and sank, killing many men but not the king, who witnessed the horrific demise of his flagship and its crew from a nearby boat. He cancelled his trip to Kalmar in the wake of the disaster. (Two years later King Hans defeated Sten Sture in battle and secured the Swedish throne.)

The location of the wreck, off the coast of Ronneby near the island of Stora Ekön, matches the historical accounts of the Gribshunden‘s sinking. The ship’s large size (at least 35 meters or 115 feet long), the tree ring dating, the carvel construction all support the identification. Also archaeologists were able to recover some mortar from the hold of the ship and found that the lime came from the Danish island of Saltholmen near Copenhagen. 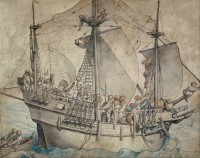 The Gribshunden is the oldest armed warship ever found in Nordic waters, and while most of the wreck is still buried in the seabed, archaeologists believe it may be the world’s best preserved 15th century ship. The study of the unique wreck is of international significance because it dates to such an important period in the history of navigation and may reveal new information about the construction of Age of Discovery ships.

The figurehead is now at the Blekinge Museum where it will spend the next few months in a bath of sugar water. That will leach the corrosive sea salt out of the wood in preparation for long-term conservation. The water-saturated wood will have to be dried very gradually to ensure it does not crack and warp. Conservators will decide which method to use once the desalination is complete. Freeze-drying is a prime candidate.

People can see the figurehead inside its water bath at the Blekinge Museum when the artifacts laboratory is opened to visitors every Thursday afternoon. On August 30th, Archaeology Day, experts will be on hand to answer questions about the figurehead and the wreck.

For an in depth explanation of the wreck’s history and archaeology, read this exceptional post by Rolf Warming of Combat Archaeology who participated in the salvage operation.

Here’s video of the wreck in situ filmed this June:

This news story shows the raising of the figurehead: