A hiker in Norway has discovered a 1,200-year-old Viking sword in such good condition that with a vigorous oiling, a little time on a whetstone and a new grip it could still be used today. Gøran Olsen was hiking an ancient trail in Haukeli, south central Norway, when he sat down to take a break and caught a glimpse of the sword under a pile of rocks. The single-edged blade is 77 centimeters (30 inches) long and made of wrought iron. It is of a type that was common around 750-800 A.D.

The trail where the sword was found crossed a mountain plateau between western and eastern Norway. Most of the year the pass is covered in snow and ice, and the climate during summer months when the snows have melted allowing the trail to be easily hiked is low in humidity. This combination helped maintain the condition of the sword, leaving it a bit rusty and dulled, but otherwise remarkably well-preserved.

“The sword was found in very good condition. It is very special to get into a sword that is merely lacking its grip,” said Hordaland County, Norway, archeologist Jostein Aksdal. “When the snow has gone in spring, we will check the place where the sword was found. If we find several objects, or a tomb, perhaps we can find the story behind the sword. This was a common sword in western Norway, but it was a costly weapon, and the owner must have used it to show power.”

Finding an associated gravesite would be a very lucky break, but odds are long. Other artifacts have been found along the trail before. It’s possible that the sword may have been inadvertently lost by a traveler or someone who was caught in bad weather and died of frostbite. There could easily be no grave to be found.

The blade has been sent to the University Museum of Bergen, Norway, for conservation and eventual display.

“We are really happy that this person found the sword and gave it to us,” said County Conservator Per Morten Ekerhovd. “It will shed light on our early history. It’s a very (important) example of the Viking age.” 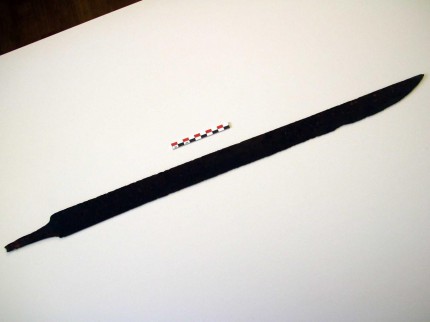