For a short window of about 80 years in the 13th century, small, portable bibles were produced on a large scale to satisfy the needs of the growing mendicant friar community and university students. Both groups needed bibles that were lightweight and easy to transport, a far cry from the large, thick-paged, multi-volume bibles common in scriptoria, libraries, churches and learning institutions. Between around 1220 and 1300, at least 20,000 and possibly as many as 30,000 portable bibles were produced, most of them in Paris, but also elsewhere in France, plus England, Italy and Spain. The university centers of Paris, Bologna and Oxford were the main production centers.

The first pocket bibles were pandects (single-volume bibles) and were consistently organized which made them easy to scan for a particular passage, a handy tool for the student and itinerant preacher. The script was tiny, with each letter a mere two millimeters high, and of course written painstakingly by hand. Each page was made of a tissue-thin parchment known as uterine vellum, the key to the books’ portability. Without pages a fraction of a millimeter thick, the pocket bibles of the 13th century could not have existed.

The economic woes and turmoil of the 14th century ended the pocket bible boom and soon the technology used to make the ultra-thin parchment, which had been kept hush-hush by producers keen to keep their lucrative trade secrets secret, was forgotten. Approximately 2,000 pocket bibles still exist today, the majority of them, about 54%, of French manufacture.

Codicologists, people who study the physical object of the book, have long debated how uterine vellum was made. Some medieval and early modern sources refer to the parchment as abortivum or charta non nata (meaning “unborn sheet”), suggesting that it was made from the skin of miscarried or aborted fetal calves. The sheer numbers of aborted livestock fetuses necessary to produce enough parchment for thousands of pocket Bibles and other manuscripts would have materially damaged the health of any herd, however, so some scholars have proffered alternative animal sources for the parchment, like rabbits or squirrels which unlike cows already have very thin skins. Others theorized that the thicker skins of cows or sheep could have been split to produce the ultra-thin parchment.

A study led by University of York bioarchaeologists sought to unlock the mystery of uterine vellum, to discover whether it was made using animals with exceptionally fine skin or the result of a specialized craft that worked any skins into tissue-thin sheets. The research team studied samples of uterine vellum drawn from 72 pocket Bibles and seven nonpocket Bibles. The sampled parchment ranged in thickness from .03 to .28 mm. The delicate, more than paper-thin pages were sampled using one of the greatest school supplies of all time: the Staedtler Mars Plastic eraser. Remember how the bright white eraser would make little tubular crumbs greyed with pencil graphite that you had to blow or brush off your paper? Those characteristic crumbs were the means by which the samples could be taken without damaging the fragile parchment. 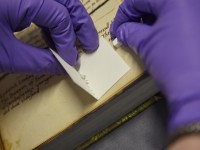 Participating archives and libraries were sent a kit with erasers, acid-free paper, nitrile gloves and 1.5 mL microcentrifuge tubes. Staffers donned gloves and collected the sample by erasing in one direction on an area of the page that had no writing, holes, tears or any other indication of weakness in the structure. The crumbs were caught on a folded page of acid-free paper and tipped into the tubes which were sealed and sent to the University of York laboratory.

The gentle unidirectional rubbing of the eraser on the pages generated an electrostatic charge that extracted protein from the parchment surface. Those protein samples were then studied using zooarchaeology by mass spectrometry (ZooMS) peptide mass fingerprinting and hair follicle pattern analysis, technologies that can determine which species of animals were used to make the parchment and their age at slaughter. The study found that none of the parchment was made from the skin of fetal or neonate animals. The youngest were eight week old calves and adult sheep and goats were also used. Of the 220 folios from 72 pocket bibles sampled, 68% were calfskin, 26% were goat, and 6% were sheep. Most of them were consistent within one bible, but five bibles were found to have parchment from more than one species. Researchers think that those five may be composite bibles rather than a single producer using skins from multiple animals to create one bible.

So since exotic animal hides weren’t behind the production of this practically see-through parchment, it must have been a specialized craft.

In order to make goat, sheep and eight week old calf parchment look as fine as if it had all come from new-born calves, the medieval artisans had to immerse the skins in alkali-rich liquefied lime so as to get rid of the fats in those skins by transforming the lipids into a form of detergent. That natural soap not only helped thin the skins but also helped whiten them by dissolving all the ingrained grime and stains.

The alkali in the lime also served to remove the thousands of tiny hairs in the skin – by weakening the chemical bonds which hold protein molecules together. However, too much exposure to lime would have also turned the skins’ collagen content into gelatine – thus irreversibly swelling and damaging the product. The medieval craftsmen seem to have discovered the precise time required to thin and whiten the skins in the lime, while not destroying them.

As well as immersing the skins in lime, the artisans also stretched them on wooden frames, scraped them with a special bladed tool – then spent many hours rubbing them with volcanic pumice stone to further thin and smooth them.

The study has been published in the Proceedings of the National Academy of Sciences (PNAS) and can be read in its entirety here (pdf).