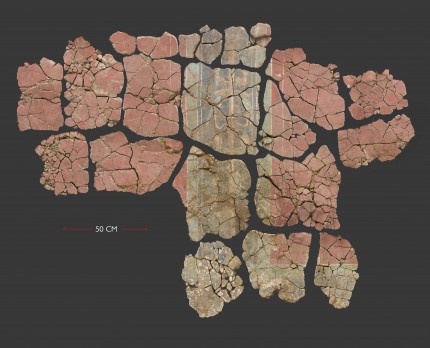 Archaeologists with the Museum of London Archaeology (MOLA) have discovered the remains of an elaborate wall fresco from the late 1st century A.D. which makes it one of the earliest extant frescos in Roman Britain. The team was excavating in advance of construction of an office building at 21 Lime Street in central London when they found the painted wall lying face down in the ground. Ian Betts, MOLA’s building materials specialist,

identified it as likely a frescoed surface even though the painted side wasn’t visible by the characteristic markings on the daub to which the plaster was applied. To keep any surviving paint from flaking off, conservators removed the fresco in 16 sections, cutting out blocks of soil around them. That way the painted plaster surface was protected by the soil that’s been protecting it for 2,000 years.

The 16 soil blocks were moved to the conservation lab where experts set immediately to work micro-excavating the soil before it dried. The revealed a fresco 2.5 meters (8.2 feet) wide and 1.5 meters (5 feet) high with a painted surface just a single millimeter thick. Solid red panels bordered with thin cream pin stripes are divided by a central section that depicts a stylized candelabrum with deer perched on the top level eating greens, a pair of parakeets underneath them and some fruit underneath them. The background is black and green with vertical cream stripes on the edges. The design is the first of its kind found in Britain. The closest example of it was found in a villa in Cologne, Germany.

The painter had to have been a highly skilled master craftsmen employed by people of signficant wealth. He used natural earth pigments accented with expensive cinnabar red, a mercuric sulphide pigment which was mined in Spain and had to be imported to London. This was top quality work that would only be seen in the most luxurious homes of the era. Small fresco fragments have been discovered before in Lime Street, so it must have been a toney neighborhood in early Roman London where the Joneses kept up with each other by decorating their walls with the most expensive continental-style artworks. This fresco adorned the wall of a public room in the house, perhaps a reception room, where it signalled to all visitors the homeowner’s wealth and taste.

While small pieces of frescoes are more common, a large section of painted wall like this is a very rare find. This is the first such discovery in 30 years. It survived, in classic archaeological irony, because of its destruction. The house whose wall it decorated was demolished in around 100 A.D. to make room for London’s second forum and basilica, the civic and commercial epicenter of the city and at three stories high occupying two hectares of land, the largest building north of the Alps, larger than St. Paul’s Cathedral. The frescoed wall was toppled and fall paint side down into the soil. The forum was built on top of it, preserving it for posterity.

The basilica, forum and most other public buildings were systematically destroyed by Roman troops in 300 A.D. to punish the city for its support of the usurper Carausius. The only civic structure left standing was the defensive wall. After the revival of London’s fortunes in the Middle Ages, a market sprang up on the site of the old forum. In 1881, the current Leadenhall Market was built there. The remains of one of the basilica’s arches were discovered during construction and in the 1980s more forum remains were found on the 21 Lime Street site. MOLA excavations in 1990 and 2001 found sections of the floor of the forum’s east wing. The most recent excavation had to dig 20 feet under the surface to find the toppled wall.

MOLA experts are still studying the fresco and its context. They hope to be able to reconstruct a view of what the neighborhood looked like in the early decades of Roman London before the construction of the forum.