The exterior surface of pottery can be a surprisingly rich source of information about ancient flora and fauna. Dents and holes that were once assumed to be insignificant have in the last 25 years been discovered to be impressions left by seeds, nuts or insects. In ancient Japan, for instance, sometimes soybeans and adzuki beans were used in the production of pottery. By examining the cavities they left behind, archaeologists were able to narrow down when cultivation of these staples began in the area.

Using X-ray and CT imaging and scanning electron microscopy (SEM), the team of Professor Hiroki Obata at Kumamoto University examined potsherds discovered in the Odake shell mound in Toyama Prefecture which dates to the early Jomon Period of Japan (5,300 – 3,500 B.C.). They found more than 500 Egoma seed cavities on the surface. The team then examined potsherds from the Motonobaru archeological site which dates to the late Jomon Period (2,500 – 1,300 B.C.). They made a silicon replica of the surface which they scanned with a scanning electron microscope. This “impression replica” system allows researchers to examine the original surface in greater detail. 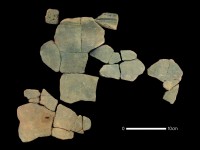 Pottery fragments from Motonobaru analyzed last year found 173 impressions of the maize weevil. That’s half the total number of ancient maize weevils ever found in Japan.

“The maize weevil is a type of harmful insect that eats stored starch food materials such as acorns or chestnuts, which are known to be typical stored food for that period in Japan. The existence of many maize weevils and cockroaches shows that these ancient humans lived settled lifestyles,” said Professor Obata. “With this latest research, we have revealed that there were cockroaches in human living areas from a period older than was previously believed. More and more information about ancient human life is being found from potsherds. Soft and small items have some difficulty remaining in the soil for a significant amount of time, but they can be kept safe within these pottery fragments. Like little time capsules, potsherds are packed full of treasures which help to reveal the story about the living conditions of ancient humans.”