You’d think the Roman fort of Vindolanda just south of Hadrian’s Wall was a footwear manufacturing concern rather than a military outpost with an attached a civilian settlement considering how many shoes have been found there. Literally thousands of shoes, their leather preserved in excellent condition by the waterlogged soil, have been unearthed at the fort and settlement over the decades. This season the excavation team has added another 350 shoes to the tally since digging began in April. One of them is making headlines for its stylish resemblance to the Adidas Predator soccer cleats favored by some of the biggest names in the game like David Beckham and Zinedine Zidane.

The shoe was found in the Severan ditch, ground zero for what appears to have been a frenzied bout of closet cleaning in 212 A.D. which resulted 420 shoes being tossed into the ditch. Most of them show signs of extensive wear or were cannibalized for parts to repair shoes that survived the great purge of 212.

This leather sandal is in good condition with only a tear along the seam of the hell. The shoelaces are gone, but there’s a slot where they would have tied together. Vindolanda spokesperson Sonya Galloway:

“The boot is the modern day equivalent of around a size one, and would have been worn by a child between the ages of eight and ten.

“It is a good quality shoe. “[J]ust like the children of today, Roman children would have been very fashion conscious. The discovery of shoe, which is very well made, shows the affluence of the Romans.

“It is the kind of shoe which would have been worn by a wealthy Roman child.”

Archaeologists think they have at least one shoe for every individual who lived at Vindolanda during the 300+ years it was inhabited. The differences in quality, design and wear attest to the diversity of economic status in the fort and settlement. They provide an extremely rare glimpse into the way people from all walks of life (pun intended) lived at Vindolanda during the Roman occupation.

The handsome shoe will now join its leathern brethren on display at the Vindolanda Museum. 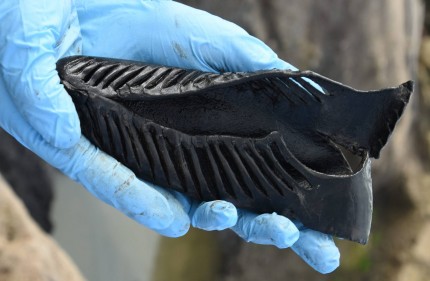