Using the latest radiological and genetic techniques, a team of researchers from Egypt, Germany and Italy have determined that the boy pharaoh King Tutankhamun most likely died of malaria and a degenerative bone disease which also forced him to walk using canes, 130 of which (some with signs of wear) were found in his tomb.

The study, reported Tuesday, turned up no evidence of foul play, as had been suspected by some historians and popular writers familiar with palace intrigues in ancient Egypt. Previous examinations of the Tut mummy had revealed a recent leg fracture, possibly from a fall. This might have contributed to a life-threatening condition in an immune system already weakened by malaria and other disorders, the researchers said. […]

The researchers said that several other pathologies were diagnosed in the Tut mummy, including a bone disorder known as Kohler disease II, which alone would not have caused death. But he was also afflicted with avascular bone necrosis, a condition in which diminished blood supply to the bone leads to serious weakening or destruction of tissue. The finding led to the team’s conclusion that it and malaria were the most probable causes of death.

Three other of mummies tested also had genetic traces of malaria tropica, the most virulent form of the disease, and several mummies shared a variety of genetic disorders like cleft palates, club feet and flat feet.

The mummies all seem to have been related to Tut. One was his father, Akhenaten, another his mother, Tiye, a third his grandmother, all of whom shared Tut’s blood group. The genetic testing indicates that Akhenaten and Tiye were siblings, and it’s thought Tut and his queen were also brother and sister, so it’s no surprise they are so many genetic disorders in the family.

There are more details about the methodology of the testing in this Scientific American article.

The Discovery Channel will be showing a two-part documentary of this study called “King Tut Unwrapped” on Sunday and Monday. You can see some clips of the shows on TDC’s website. 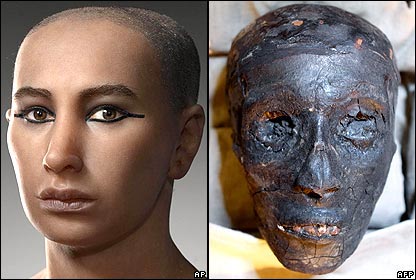