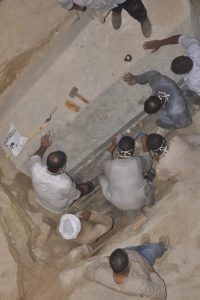 Because the Internet is a silly place, the 30-ton black granite sarcophagus unearthed in Alexandria earlier this month became something of a meme. It looks so deliciously ominous that the plan to open it sparked a viral wildfire welcoming/warning the demonic powers sure to be unleashed once the lid was pried up.

Fearing no plague-wielding revenants or curses from ancient gods, a team of experts dispatched by the Ministry of Antiquities opened the sarcophagus on Thursday. The first glimpse inside revealed a red fluid filling much of the coffin. It smelled so putrid that the team left the lid off for an hour before attempting to remove enough of the liquid to see what else might be in the sarcophagus.

The foul fluid was removed one large jug at a time. When they got down to the lees, the team found the skeletal remains of three individuals. They had originally been mummified, but the liquid turned out to be sewage water that had leaked into the coffin via a crack on the east side and it had eaten away at the mummified tissue leaving only the bones.

The lack of inscriptions on the sarcophagus indicated that it did not belong to a pharaoh or king. When it was first discovered, Antiquities Minister Mostafa Waziri surmised that it might hold the remains of a priest as someone who would have had the social significance to command so large and impressive a coffin. Preliminary examination of the bones tells a different story. One of the skulls has multiple fractures, the result of sharp-force trauma that indicate he died in battle. The other two skulls are intact. All three appear to be male.

The mummies are being moved to the Alexandria National Museum which has a state-of-the-art laboratory for the conservation and study of ancient remains and artifacts and the high-tech security system to keep them safe during the process. There they will be X-rayed and analyzed to determine their ages at time of death, map their facial features and pinpoint their dates.

The sarcophagus will be raised from the pit with a mechanical loader. Cars have been temporarily exiled from the street to make way for the behemoth that will lift the black granite behemoth out of the ground and transport it to the Military Museum in the adjacent military northern region. The pit will then be scanned with metal detectors and excavated further to make sure all artifacts are recovered.

Lastly, the miasmic nameless horror that was released by these unwitting fools will spread over the world and swallow us all until we hear naught but the grinding of gizzard stones and taste naught but the burning bitterness of stomach acid for all eternity.