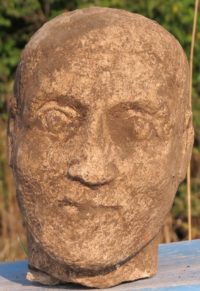 Archaeologists have unearthed a marbleized limestone head thought to be of the Emperor Aurelian in the ancient Roman city of Ulpia Oescus near the village of Gigen in northern Bulgaria. The statue head dates to the 3rd century A.D. and shows the signs of having been used in construction in late antiquity or the early Middle Ages. The ears were damaged in the attempt to use a head as a building block, but a round, bumpy head does not make a good brick, ears or no ears, so it was dumped in a pit for archaeologists to find centuries later.

“The hairstyle, the depicting of the chin, the way the eyes are depicted all speak of the fact that this statue is from the 3rd century AD, the period of the so called barracks emperors, or soldier emperors in the Roman Empire (235 – 284 AD),” [lead archaeologist Gergana] Kabakchieva explains, as cited by Bulgaria on Air TV.

“Based on the size of the head, we can assume that the statue it came from was slightly smaller than life-size, probably about 1.5 meters (5 feet) tall,” she adds.

“This statue was the work of a sculptor from a local atelier in Ulpia Oescus. From Oescus, we have data about the earliest [Ancient Roman] sculptor’s workshop (atelier) in today’s Bulgaria. It dates back to the reign of Roman Emperor Nero (r. 54 – 68 AD), that is, the middle of the 1st century AD,” the lead archaeologist elaborates.

Oescus began in 9 A.d. as a permanent fortified military encampment during the reign of Augustus. Legion were stationed there until 102 A.D. when they were moved at the end of the Dacian War. A civilian settlement of veterans was built on the site and granted the status of colonia by the emperor Trajan, one of only three coloniae in modern-day Bulgaria. The emperor’s middle name, Ulpius, was integrated into the new name of the town.

Located in the most fertile area of the Danube valley on the mouth of the Iskar river at the intersection of several Roman roads, Ulpia Oescus became one of the most important cities in the province of Moesia Inferior. It was a center of trade, religious worship and the arts. The city had one of the largest sculpture workshops in the province. The only colossal Roman statue ever found in Bulgaria was made there.

A clear indication of how important Ulpia Oescus was is that Constantines’s Bridge was built there. The bridge was the largest on the Danube, a mile and half long, 19 feet wide, and the largest river bridge in the empire. Constantine himself attended its opening.

The excavation also unearthed a previously unknown section of the palace Constantine stayed in for the ribbon-cutting ceremony on July 9th, 328 A.D. It’s a marble colonnade on the western side of the main residence of the city. Constantine may have walked through that very colonnade when entering the building.

The bridge didn’t last long. It was destroyed in 355 A.D. during a barbarian invasion. The city was destroyed by the Huns under Atilla in 411. They later tried to rebuild the city as a settlement named Hunion, but it didn’t take. The invasion of the Avars in the late 6th century ended all attempts to rebuild any part of the city. In the 10th century a village from the First Bulgarian Empire was built over the ruins. It was abandoned in the 14th century.

2 thoughts on “Head of Aurelian found in Bulgaria”