A fisherman has discovered the tombstone of a 12-year-old Roman girl in the Sava river in Kranj, northern Slovenia. Jure Meden was fishing the Sava near Kranj’s medieval old town last week when he spotted a rectangular block of stone. He contacted the Institute for the Protection of Cultural Heritage of Slovenia and it sent archaeologists to take a look at the stone. They saw that it had a Latin inscription marking it as the gravestone for a young lady named Aurelia who died when she was 12 years old in the 1st or 2nd century A.D. Her bereaved father commissioned the stone.

There is archaeological evidence of human occupation going back to the Bronze Age and there were settlements on the site in the late Iron Age. The town of Carnium, which would become modern-day Kranj, was officially founded where the Sava and Kokra rivers meet by the Romans. An earlier Celtic burial site is located in the southern part of the town overlooking the left bank of the Sava, but Roman cemeteries have not been pinpointed. While Roman grave markers are not uncommon in Slovenia, this is the first one known to have been found in Kranj.

It’s not clear whether the stone was transported any significant distance by the high water or whether there’s a nearby cemetery. Wear on the stone indicates it has been in the water a very long time. There’s a divot at the top of the tombstone that suggests there was another feature above the inscription, possibly a small statue, mounted to the stone.

The stone is in quite decent condition considering it has spent centuries under running water. To prevent any further deterioration, archaeologists wasted no time getting the gravestone out of the Sava. Two days after it was found, firefighters raised the stone from the river and transported it to the Restoration Center of the Institute of the Slovene Academy of Sciences and Arts in Ljubljana for conservation and further study. 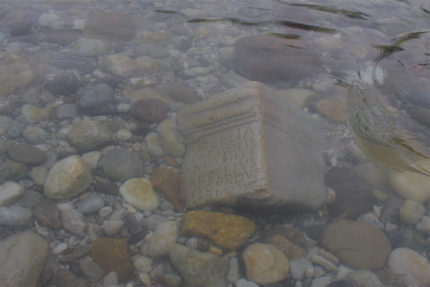