An international team of researchers has opened a 1,000-year-old sarcophagus buried under the floor of St. John’s Church in Mainz, Germany. The team had to work very quickly to document and analyze the contents and reseal the sarcophagus out of respect for the dead and to complete their work before exposure to air damaged any remains. It took months of planning to organize the complex procedure. First, the lid of the sarcophagus, which weighs 1,540 pounds, was lifted using a pulley system. Then 14 researchers from different specialties — anthropologists, metallurgists and textile experts, radiologists, etc. — went to work examining what was inside.

They were hoping to find the remains of Archbishop Erkanbald, Bishop of Mainz from 1011 until his death in 1021, but the only human remains were fragments of bones. It seems the body was covered in quicklime before the sarcophagus was closed to accelerate decomposition. It worked. Not even teeth remain. The radiologists on the team who were present to do immediate X-rays of the bones went home unfulfilled.

They did find sections of gold textiles near the head and lower leg, evidence that the individual was buried wearing very fine headgear and robes. Scraps of cloth shoes made from high quality fabric were also found. The gold fabric near the head could be all that remains of a bishop’s hat. The placement of the burial in the central nave pointed towards the altar indicates he was certainly a high church official.

St. John’s is the oldest extant church in Mainz and the only surviving example of late Carolingian cathedral architecture in the country. The Catholic diocese of Mainz and the Protestant church hoped opening the sarcophagus would reveal new information about the church’s early history. If the bishop was indeed inside that sarcophagus, that would confirm that St. John’s was the first cathedral church of Mainz, the seat of the bishop before it was moved to the current Cathedral of Mainz in 1036. 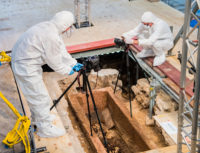 The sarcophagus may yet give up its secrets. In the next few days it will be scanned with a metal detector. If there’s a ring inside, it could confirm that the person laid to rest was indeed Bishop Erkanbald. Tissue and bone samples will be DNA tested and radiocarbon dated.

Furthermore, the sarcophagus itself is of singular interest. There is evidence that it was altered significantly before its burial in the church. The design of the interior was chiseled off. It’s possible it was used twice and had to be enlarged to make space for the clergyman. Whatever was done to it was done before the burial. The sarcophagus has not been opened or interfered with in any way since it was placed under the floor of the church 1,000 years ago.

The sarcophagus will be open in public view this weekend only.