The British Museum has the largest collection of Assyrian reliefs in the world, with 240 panels on display and another 80 in storage. Only lack of space and funds keeps those 80 out of public view, not any inferiority of quality. Indeed, one of them, the Banquet Scene from the North Palace of Ashurbanipal in Nineveh, is regarded by many as the finest Assyrian single panel relief in the world. They used to be on display in a basement gallery but it was closed in 2006 and these priceless treasures have only rarely been exhibited at the BM or loaned to other institutions in 13 years.

Now 14 of them, including the Banquet Scene, the Royal Lion Hunt and the Attack on an Enemy Town, will re-emerge from the penumbra into the bright sunshine of Malibu where they will go display at the Getty Villa for three years. The Banquet Scene is one of the 12 gypsum bas-relief panels that form the core of the Getty’s new show Assyria: Palace Art of Ancient Iraq starting on October 2nd and running for three years.

The Banquet Scene and several other of the British Museum’s relief panels were discovered in the 1850s by Hormuzd Rassam in what was then Ottoman territory. Rassam’s team excavated the ancient Assyrian site of Nineveh near what is now Mosul, Iraq, for the British discovering the North Palace of King Ashurbanipal (r. 668-627 B.C.). The walls had been adorned with elaborate bas-reliefs of the king in action — hunting, fighting — and at leisure, although even his famed banquet scene directly references his deadly power as a king and warrior by including the decapitated head of the vanquished King Teumman of Elam hanging from a tree behind the queen.

Other reliefs in the exhibition were discovered in the palaces of  Kings Ashurnasirpal II (r. 883–859 B.C.), Tiglath-pileser III (r. 745–727 B.C.) and Sargon II (r. 722–705 B.C.) in the mid-19th century. All of the Assyrian royal palace reliefs were originally painted in vivid polychrome that would have emphasized the fine details, but even with the paint long faded, the exceptional quality of the designs still shines. The pattern of the king’s

clothes, the ringlets in the hair, the muscles and bones of the animals, are carved with painstaking artistry. These were not just wall decorations, after all; they played a key role in conveying the all-encompassing power  of the king (in battle, at the hunt, in religious significance) in the most important public rooms and in his private rooms.

“The British Museum possesses the largest and most important collection of Assyrian reliefs in the world. The fourteen panels on view at the Getty Villa create a compelling overview of the subjects, styles, and artistic achievements of Assyria’s sculptors, including outstanding masterpieces such as the ‘Banquet Scene’ of the last great king of Assyria, Ashurbanipal, reviled as ‘Sardanapalus’ in the Old Testament,” says

Timothy Potts, director of the J. Paul Getty Museum. “At the time of their discovery, taste in Britain—and Europe generally—hewed strongly to classical models, by which standard some saw these Assyrian monuments as unrefined; but this attitude soon subsided, and they are now universally appreciated as artistic achievements of great visual and emotional power. In our own day the historical and cultural importance of these sculptures has increased with the tragic destruction by ISIS of many of the reliefs that remained in Iraq.  We hope therefore that this display will raise awareness of the need to protect major heritage sites that remain at peril around the world.”

While the panels are on loan, the British Museum is working on creating a new space to display all of their Assyrian reliefs. That’s a very long-term project, however, and given the huge sums involved and all the red tape that has yet to be cut through in approving the project, it could be a decade or more in the future. In the short-term, the museum is building a state-of-the-art archaeological storage facility in Reading which is scheduled to be completed in 2023. 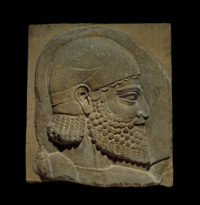 To complement the Assyrian exhibition, the Getty will be offering a free talk on one of the most striking iconographic elements of the reliefs: beards. Ancient facial hair expert (yes it is a thing and yes it is awesome) Christopher Oldstone-Moore will give a talk entitled The Meaning of Beards from Antiquity to Today on October 26th at 3PM. You must book tickets in advance but they are free. Even cooler, though, right before the lecture the Getty will be offering a drop-in program during which a stylist will recreate ancient beard looks from Assyria, Greece and Rome. Attendees will also be able to get their hands dirty — fragrantly perfumed and moisturized, actually — making their own beard or body oil using ancient scents. What better way to usher in No-Shave November than to get spruced up Ashurbanipal style.

3 thoughts on “Assyrian reliefs (and beards) at the Getty”