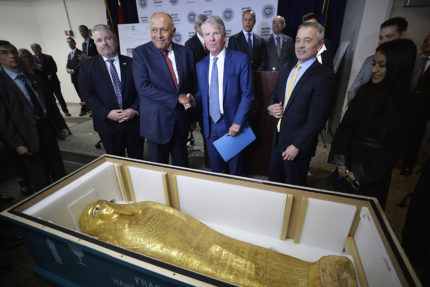 The exquisite Late Ptolemaic gilded cartonnage coffin of the priest Nedjemankh was officially returned to Egyptian authorities in a ceremony in New York City Wednesday. Manhattan District Attorney Cyrus Vance Jr., Special Agent-in-Charge for Homeland Security Investigations Peter C. Fitzhugh and Egypt’s Foreign Minister Sameh Hassan Shoukry presided over the formal repatriation of the six-foot coffin that was looted from Egypt in the wake of the popular uprising that overthrew Egyptian President Hosni Mubarak in January 2011.

The mummiform coffin decorated with thick layer of gesso reliefs and covered in an unbroken layer of gold was bought by the Metropolitan Museum of Art in 2017 for $4 million. The seller was French dealer Christophe Kunicki who gave the Met an export document from Egypt dated 1971 as proof that the exceptional, never-before-seen object had been legally removed from the country and been slumbering unknown in ye olde Swiss private collection. In February of 2019, after months of investigation, the Manhattan District Attorney’s Antiquities Trafficking Unit informed the museum that the export document was a forgery, the coffin very recently looted and the Met defrauded of four million dollars.

The investigation traced the movement of the coffin from its theft in the Minya region in October 2011 to the United Arab Emirates, Germany — where it was restored — the auction house in France and finally New York. This is just the tip of the iceberg and the investigation is ongoing, active in three countries.

That the artifact first surfaced in 2011, a year that saw the revolution overthrow president Hosni Mubarak, “should have been a red flag,” Vance said.

Not to mention the reddest of red flags in the book, the Swiss private collection canard. I still can’t even believe I fell for that.

Vance said he had elaborated on details of the investigation “in the hope that folks in the industry will take note and perhaps use the lessons learnt in this case to better scrutinise their acquisitions.” […]

Vance said it was among hundreds of objects stolen by the same multi-national trafficking ring, and that “more significant seizures of prominent antiquities in the months and years to come” are possible.