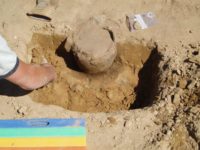 An excavation in Løgstrup, northwest of Viborg in Denmark in 2008 and 2009 unearthed a distinctive Late Bronze Age settlement site with the remains of farm houses, cooking pits and bronze casting pits. The site had been built and expanded in phases around 900-700 B.C., artifacts including bronze objects, amber, pottery and two urns believed to be cremation burials. The urns were recovered and taken to the Viborg Museum for later research.

In October 2019, a full decade after their discovery, the two urns were CT scanned. The scan found bone fragments in both urns, the remains of cremations archaeologists had expected to find. One of the urns contained something unexpected: a small object shaped like a small hockey puck. Researchers carefully excavated the urn and retrieved the hockey puck. It looked unremarkable at first, but once it was cleaned, archaeologists could see it was an extremely rare amber object from the Bronze Age known as a solar disk. This is the first documented discovery of a Bronze Age solar disk in Denmark.

The piece is small at 3 cm (1.2″) in diameter and .9 cm (.35″) thick, but it would have been highly valuable both for the expense of the amber material and because it was very finely crafted. When lit from behind, it glows fire red with concentric circles of cells that look like a dahlia. It had not been burned on the pyre with the teenager whose remains were in the urn, but been placed on top of his or her burned legs afterward.

Amber was a valuable commodity in the north during the Bronze Age. It was a symbol of the sun, a manifestation of the sun’s power and light, design motifs indicating a belief that just like the sun traveled across the sky during the day, it traveled through the underworld at night. The expensive amber disk may have been added to the burial as an indicator of societal position and/or as a religious expression, a prayer that the deceased’s spirit would travel to the afterlife in the protective embrace of the sun.

It’s also just uncannily beautiful. This is what it looks like under normal light. 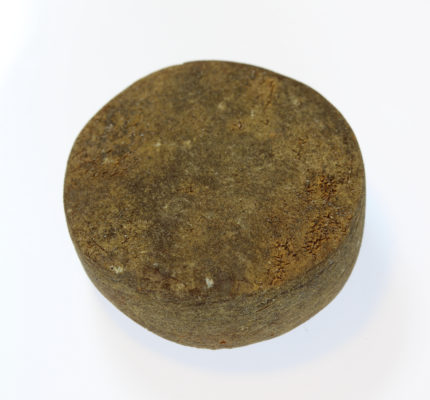 This is what it looks like with a light shining behind it. 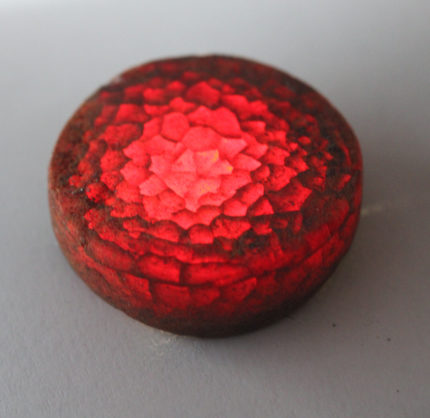