Archaeologists excavating the site of future apartment building construction in the center of Nîmes have unearthed a small Celtic burial ground. Dating between the 6th and 5th centuries B.C., burials include three cinerary graves, two ceramic ossuaries and a bone pit. Grave goods of knives and fibulae suggest the deceased were probably men.

The necropolis was a small but deliberately planned space. It runs along a

central north-south axis about 130 feet long which was probably a walkway between the graves in antiquity. There’s evidence of an east-west axis about 120 feet long, but it’s not clear if it was an agricultural enclosure or part of the funerary complex. Each grave is rectangular and separated by ditches. The ditches served as the foundation for thick timber and earth walls. Most of the enclosures were disturbed by later construction, but two of the five are intact and adjacent to each other, joined by the short sides of the rectangle.

The location relative to the Iron Age settlement is ambiguous. The necropolis was about a third of a mile from the agglomeration that would become Nîmes, far enough away to make it unclear whether the tombs belonged to residents of the town or of the countryside. What is certain is that after the burials stopped, the necropolis was converted to viticulture. Around 50 vine pits have been discovered, all regularly arranged in the east-west orientation of the shorter ditch. The vine cultivation dates to the early 2nd century B.C., after which the vineyard was replaced by an orchard. 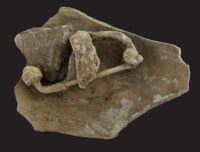 In the Imperial era, a Roman road was built through the necropolis, following the lines of the funerary enclosures. It was just outside the city walls, a few hundred feet from the south gate. The road through the former burial ground would have crossed the main road out of town, the Via Domitia.

Interestingly, while the site appears to have been used for farming in the Middle Ages and there is no evidence that anybody even knew it had ever been a burial ground, but its ancient purpose saw a brief revival in the modern era. The skeletal remains of three individuals were unearthed in the excavation. Archaeologists believe they were likely Protestants, and therefore prohibited from burial in the consecrated ground of a Catholic cemetery. There was a sizeable Protestant population in Nîmes during the 16th and 17th centuries, but its churches (called temples) were either destroyed or repurposed after the Revocation of the Edict of Nantes in 1685.