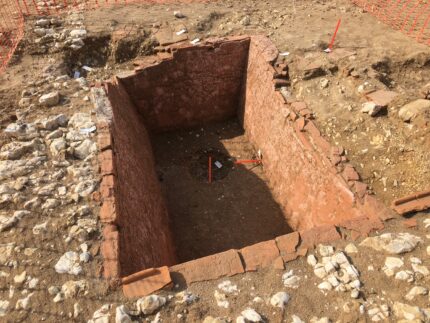 Archaeologists have discovered a Gallo-Roman wine vat from the 2nd century near the village of Vaugourdon in Touraine, central France. A team from France’s National Institute for Preventive Archaeological Research (INRAP) found the vat during an excavation of the site of a future fishery when they unearthed a deep rectangular pit built of roof bricks and lime mortar making it water-tight.

The Loire river valley is one of France’s top wine producing regions, with a history of viticulture that goes back to the Roman era. If the presence of grape juice is confirmed from presence of tannins in residues on the brick, this vat will be the earliest direct archaeological evidence of wine production in Touraine.

Winemaking in Roman Gaul, especially in this period, was predominantly based in the Mediterranean south of the country, and most evidence points to it creeping north to areas such as the Loire much later in the Roman period; as late as the 3rd century AD.

The famous saint, Martin of Tours, is a patron of vintners, vine-growers and winemakers and his wine-related hagiography is firmly linked to the area. He is credited with encouraging the spread of viticulture throughout the Touraine region, introducing Chenin Blanc and supposedly his donkey ‘discovered’ pruning by nibbling the foliage of a monastery’s vineyard (though there is an Ancient Greek myth where Aristaeus discovers this by watching a goat do the same thing).

But St Martin lived in the 4th century AD so this new site is as much as two centuries older.

The discovery of one winemaking site does not prove that viticulture was a large, flourishing industry in the Loire during this period of course but it does (potentially) show that limited viticulture was a reality and much more widespread in early Roman Gaul than former evidence suggested.

INRAP archaeologists have also discovered the foundations of a large villa near the vat. Fragments of marble and a well-preserved hypocaust system indicate this was a luxurious, expensive home. Its possible dates range from the 1st through the 3rd century A.D., so it may or may not be connected to wine production, but it likely belonged to a wealthy farmer, possibly absentee, who employed and housed numerous people on the estate year-round.