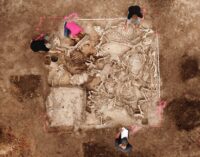 The richly furnished grave of a Germanic prince buried with 11 animals and six women has been discovered near the village of Brücken-Hackpfüffel in the German state of Saxony-Anhalt. It dates to between 480 and 530 A.D. and was the central tomb of a large burial mound, now eroded.

The remains of the illustrious personage buried in the central grave have not been found yet. A soil block containing metal pieces believed to have been part of a cauldron was removed for excavation in laboratory conditions. The cinerary remains of the tumulus owner may have been buried inside of it. It must have been of major importance, because the six women were buried around the cauldron in a radial alignment like the rays of the sun. It is not yet known if they were deliberately killed or sacrificed themselves to accompany the deceased into death. The animals — cattle, horses, dogs — were buried after the central occupant was interred and the mound built, likely offerings to honor the deceased.

The burial mound is part of a Migration Period cemetery that was discovered by chance during construction of a chicken breeding facility. Almost 60 graves have been discovered. Grave goods excavated so far include the figurine of a Germanic deity, a glass bowl with swirl decoration in pristine condition, a glass spindle whorl, silver gilt fibulae, an iron sword and shield boss and a gold coin minted during the reign of Eastern Roman Emperor Zeno dating to around 480. The glass objects bear the signature manufacturing technique of Gallo-Roman workshops on the Rhine.

The fibulae were of a type produced by the Lombards, Alemanni and the Thuringii. The most elaborate of the fibulae still includes a fragment of textile that was captured and preserved by corrosion of the metal. Analysis of the fragment may narrow down its provenance. If it from a light cloak, it’s likely Lombard as their territories were more southerly.

By a stroke of archaeological good luck, the cemetery was in a depression

on the landscape. Over the years, layers of soil built up over it, so even though the site has seen centuries of agricultural use, the graves were never damaged. They weren’t even any hints of their presence on the surface, so they’ve been preserved from the depredations of looters.

Excavations in situ and in the laboratory are ongoing. The precise location of the cemetery is being kept under wraps for security purposes.