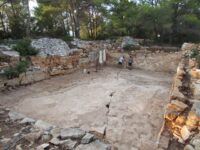 A monumental cistern built by Greek colonists in the 4th century B.C. on what is now the Croatian island of Korčula has been fully excavated. The ruins of the ancient cistern were known to exist on Koludrt hill near the town of Lumbarda, but the full extent of this monumental structure was never explored until now.

Archaeologists have been working to clear it to document it thoroughly and preserve it for the future. It is an open-air structure and therefore susceptible to the elements and to damage from human contact. The plaster lining the stone basin, which was necessary to create a waterproof container, is of particular historical interest from an engineering perspective.

“The tank is huge, 10×17 meters in floor plan size and preserved height in the deepest part of 3 and a half meters. That’s a huge amount of water. Technologically, it is a fascinating object that is unique in the Mediterranean,” claims archaeologist Hrvoje Potrebica.

One of the puzzles is that it is open, has no traces of a roof structure, but monumental in its size – there is no Hellenistic building on the east coast of the Adriatic that could match it. That is why the cistern is big news in the world of archeology, and it was recorded with the most modern 3D scanner in the world.

“We currently have the most modern scanner in the world that recorded a tank with 430 million points. So our resolution is one millimeter, so we hope that we will get documentation and an exceptional means of monitoring,” explains Potrebica.

The cistern is also the find site of the oldest written document ever discovered in Croatia: the Lumbarda Psephisma, discovered in 1877. It is a record of the founding of the colony, a contract between the new colonists from Issa (a Greek colony on the Adriatic island of Vis) with the local Illyrian potentates Pyllos and his son Dazos. The inscription stipulates how much land the original colonists who fortified the town will be allotted, how much later colonists will receive and penalties for non-compliance. It closes with an extraordinary list of more than 200 names of the original colonists.

The Psephisma has been dated to the late 4th, early 3rd century B.C., around the same time the cistern was constructed. The water is held would have supplied all the colonists within the fortified walls of the town, perhaps even the very people named on the agreement. 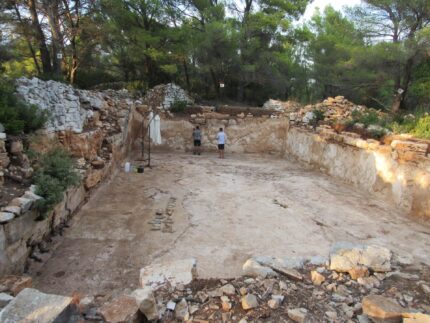