I’m glad I put a question mark on my first post about this story in 2011, because the Bronze Age mass-death site in Tollense, northeastern Germany, may not have been Europe’s oldest known battle after all.

First a recap. Archaeologists have excavated more than 12,000 human bones in the Tollense River Valley since a humerus bone with a flint arrowhead viciously embedded it was discovered in 1996.  The arrowhead dated the fatal event to around 1250 B.C., a date confirmed by radiocarbon 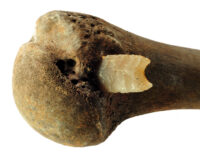 analysis of later finds. Initial studies of the skeletal remains of 145 individuals that could be pieced together identified numerous wounds inflicted by long-range weapons (arrows, lances), blunt weapons (wooden clubs) and short-range melee weapons (swords, daggers). The bones also predominantly belonged to young males, some with healed wounds suggesting they had fought before and lived to do it again. Stable isotope analysis and DNA revealed that they were not all local. Artifacts found at the site confirmed an armed clash had taken place. Dozens of weapons were found — more than 50 bronze arrowheads, swords, clubs, an axe. The skeletal remains of several horses were also unearthed from the riverbed.

Then in 2016, divers recovered a cache of scrap metal and tools in the Tollense riverbed. Tightly packed together were fragments of bronze sheets and ingots, a chisel, sickle knife, a bronze awl, brooches, a bronze spiral and a star-ornamented belt box. These was deemed to be the toolkit of one of the combatants, the first personal belongings found on a battlefield. There was no evidence of who they belonged to; the warrior hypothesis was based on the understanding of the battle context.

The discovery of this cache and other tools, plus pewter rings (portable sources of the tin necessary to make bronze), gold spiral rings and smaller bronze spirals believed to have been trimmings on clothes, made archaeologists suspicious that there were civilians in the mix, not just warriors. Recent studies of the bones found the remains of women and even children as well as the men. There were individuals whose legs showed signs of heavy labour but whose upper bodies showed no equivalent stresses. This is evidence that they walked a great deal bearing heavy burdens. Had they been warriors, the bones of the upper body would bear evidence of more developed musculature and repetitive stress.

Isotope and DNA analysis of the remains of 12 men and two women revealed they came from different parts of northern and central Europe. There was no genetic homogeneity in the group so they were not related. This was therefore not a battle between locals and foreigners or an army invading from the south.

Detlef Jantzen, chief archaeologists for the State Office for Education, Science and Culture of Mecklenburg-Western Pomerania, now believes the encounter in Tollense may not have been a battle, but a massacre. The victims were part of a trade caravan who were ambushed at the bridge crossing over the river. Caravans had armed security which put up a fight, but they were overwhelmed and slaughter ensued.

Jantzen also sees the number of participants in the conflict less today than it was years ago, when it was assumed that thousands of warriors collided. “I’m not repeating the number,” he said. More than 12,000 human bones were recovered and about 140 individuals examined by anthropologists. Most of them died of stab wounds and cuts, and some arrowheads were still stuck in the bones.

Jantzen assumes that the majority of those found were among the defeated. The victors would probably have taken their dead and buried them. However, no Bronze Age graves were found on the surrounding areas. The victims were looted and left lying. Another indication that it was not a cavalry battle is the texture of the horse bones. The investigations would have shown that the horses were actually not old enough to ride. They could have been carried as a trade item.

“The interpretation of the incident in the Tollensetal has not yet been completed,” said Jantzen. “We will continue to investigate.” 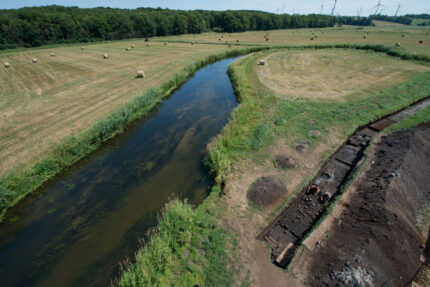