Originally the ancient Thracian settlement of Artanes on the banks of the Danube, the Roman town of Almus began as a military barracks and waystation on the Via Istrum, the Roman road built along the limes (the military frontier), in around 29 A.D. The stone fortress was built in the early 2nd century A.D. and then rebuilt and expanded into a pentagonal fortress covering 10 acres during the reigns of Diocletian (r. 284-305 A.D.) and Constantine the Great (r. 306-337 A.D.).

The tombstone therefore predates the construction of the big fort and its bigger successor. It is made of high quality marble and preserves part of five lines of text. Only the bottom of the letters of first line remain, but they are enough to identify the word “imaginifer,” the standard bearer entrusted with carrying the imago, a beaten metal portrait of the emperor. This was a position of great honor granted only to soldiers with the most distinguished records.

The second line — DEM DEC — confirms his military leadership role as DEC  was an abbreviation for decurion, the commander of a of a Roman cavalry squadron. It also could stand for decuria, one of a body of ten local magistrates akin to a town council, but given that he was an imaginifer, the military interpretation is the likeliest. Last year’s excavation at Almus discovered the remains of a cavalry barracks, and this year’s found the skeleton of a horse, so the fortress had cavalry garrisoned there.

The third line is VIX ANN, an abbreviation for “he lived years,” and fourth line completes it with XLIV, the Roman numeral for 44, meaning the man was 44 years old when he died. The fifth line is the name AMARANTVS. This was the person who erected the tombstone in honor of the deceased. It is a Greek name (meaning “unfading”), which in this context indicates he was a freedman of the decurion’s. 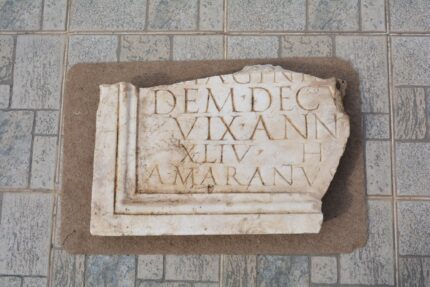 I am baffled by the interpretation of this inscription promoted by lead archaeologist Valeri Stoichkov from the Lom Museum of History.

Stoichkov has described the information revealed by the 1st century AD marble tombstone inscription as telling “a sad story”.

The prominent Roman man, the military veteran honored by the tombstone, served a total of 44 years in the Roman military – whereas the normal term of military service in the Roman Empire was 25 years.

The Roman military veteran in question was buried by his slave since he did not create a family and did not have any other heirs. The Roman military veteran thus most probably left all of his belongings to his freed slave. In gratitude for his freedom and the inheritance, the slave erected the tombstone as a monument to his former master, the lead archaeologist explains.

Unless there’s something I’m missing on that inscription, which is entirely possible as my understanding of Latin abbreviations is cobbled-together at best, the 44 years are specifically noted as his age, not his years in the legions. VIX is short for “vixit,” which means “he lived,” not he served or he fought or anything else that even hints at a military term. Besides, even if he had been allowed to re-enlist after the end of his 25-year term, there’s no way they would have fed and clothed his old ass for another two whole decades.

As for the freedman erecting the tombstone, that was a very common practice that says nothing at all about whether the deceased ever had a family. Many funerary inscriptions were commissioned by freedmen in gratitude for their former owners. The grizzled, lonely old soldier, denied a wife and kids by his hardest of hard service, leaving all he owned to his freedman who repaid him with a nice funerary inscription is pure fantasy.