Archaeologists have discovered the first known British mosaic created in the 5th century at Chedworth Roman Villa in Gloucestershire. Absolute dating of this mosaic in Room 28 was made possible by the discovery of charcoal and bone sealed in the foundation trench of one of its walls. Radiocarbon dating of the organic materials found that the wall was built after 424 A.D., and the mosaic could only have been laid after that.

The traditionally accepted view among historians has been that Britain went into a rapid economic decline after the Roman withdrawal from Britain in 410 A.D. The legions and imperial functionaries took their wages with them and new coinage stopped being imported into Britain. That cratered the market for sophisticated craftsmanship like mosaic floors and expensive imports, and populations turned to subsistence farming. Large villas and urban centers were abandoned or repurposed.

This view has been revised in recent years, as new discoveries in Wales, Cornwall and England indicate that pockets of Roman-style administration and culture survived the collapse of Roman rule and the rise of local warlords. Coins from the reign of Theodosius found underneath a mosaic pavement in the Roman villa at Hucclecote, just 15 miles northwest of Chedworth, was laid after 395 A.D., but it’s not known exactly how long after. That’s why the radiocarbon dating results are so significant, because they are hard evidence that Roman mosaic work was done long after the demise of Roman political control.

Room 28 was created by the division of an existing room (hence the construction of the wall). When the new space was complete, the mosaic floor was installed to fit the room. Today most of the floor is lost, but the edges survive. The outer border is in a guilloche pattern with alternating flowers and knots in the circles. There are some errors in the design and the overall quality of the work is inferior to the older mosaics found elsewhere in the villa. 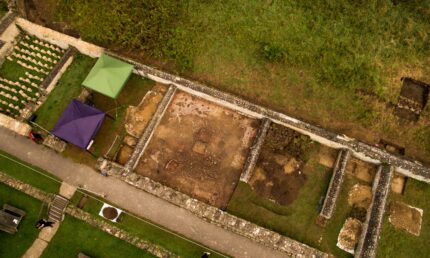 [Martin Papworth, National Trust archaeologist,] continues: “It is interesting to speculate why Chedworth Villa’s owners were still living in this style well into the 5th century. It seems that in the West Country, the Romanised way of life was sustained for a while. Many large, richly decorated Roman Villas have been found in the countryside around Cirencester, which is around 8 miles from Chedworth.

“By the end of the 4th century, Cirencester was the second largest Romano-British town after London and had become the capital of a separate province ‘Britannia Prima’. The wealth of these many lavish villas surrounding this provincial capital surpassed that of any group found across the rest of Britain. Perhaps this territory occupied a more protected area, sheltered from the hostile raids taking place from the north and along the western and eastern coasts.

“We have also made occasional finds of 5th-6th century pottery from Africa and Palestine amongst the ruins at Chedworth which are also strong indicators of sub-Roman high-status occupation at this time. Scraps of similar pottery which have been found in other local villas suggest that Chedworth was not a unique survivor during the troubled times of the 5th century.”

Here’s a flythrough of the mosaic in Room 28 of Chedworth Roman Villa: