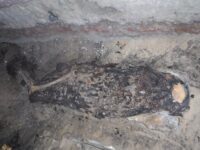 Scientists have discovered the oldest physical evidence of a gynecological treatment in an Egyptian mummy from the Middle Kingdom. A team of researchers from the University of Grenada in Spain and the University of Jaén in Aswan studied the mummy of an adult woman found in a shaft and chamber tomb at Qubbet el-Hawa on the west bank of the Nile opposite Aswan in 2017.

Radiocarbon dating found the woman died between 1878 and 1797 B.C., the late 12 Dynasty. While people buried there where from the upper echelons of society, mummification of this period at Qubbet el-Hawa tends not to preserve a great deal of soft tissue. The remains of the woman wrapped in layers of linen bandages were skeletonized. The outer coffin has suffered extensive termite damage, but enough survived to identify her by name as Sattjeni A. Archaeologists believe the initial was added because Sattjeni was a popular name among upper-class women of her time, so the A was necessary to distinguish her from all the other Sattjenis. 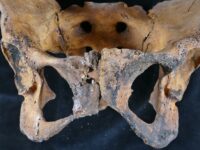 Osteological examination of her remains discovered a fracture in her pelvis, perhaps the result of the fall, severe enough to have caused her a great deal of pain and sterility. Medical texts dating to this period prescribed fumigations to heal gynecological injury. A hemispherical drinking cup placed between her bandaged legs was found to contain the burned remains of organic material consistent with the fumigation treatment described in 12th Dynasty papyri.

“The most interesting feature of the discovery made by the researchers from the University of Jaén is not only the documentation of a palliative gynaecological treatment, something that is quite unique in Egyptian archaeology, but also the fact that this type of treatment by fumigation was described in contemporary medical papyri. But, until now, there had been no evidence found to prove that such treatment was actually carried out,” explains the UJA’s Dr. Alejandro Jimenez, an expert in Egyptology and director of the Qubbet el-Hawa Project. This work has now been published by one of the most prestigious academic journals in Egyptology, Zeitschrift für Ägyptische Spracheund Altertumskunde.