The image of a wild pig on a cave wall in Sulawesi, Indonesia, has been dated to 45,500 years ago, making it the oldest known cave art animal in the world. The life-sized Sulawesi warty pig (Sus celebensis) was painted in dark red ochre on the limestone wall of Leang Tedongnge cave. It was outlined in profile and filled in with lines and dashes. There are two hand stencils over its hindquarters.

The pig was able to be dated thanks to a coralloid speleothem, a tiny calcite deposit known as cave popcorn, on one of its hind legs. Researchers chiseled the calcite from the wall and conducted  uranium-series isotope analysis on extracted samples. The results found the pig was at least 45,500 years old, and very likely older given the time it must have taken for the speleothem to form.

The pig is in exceptional condition despite its advanced age. At least two other pigs are part of the rock art panel, but much of their pigment has 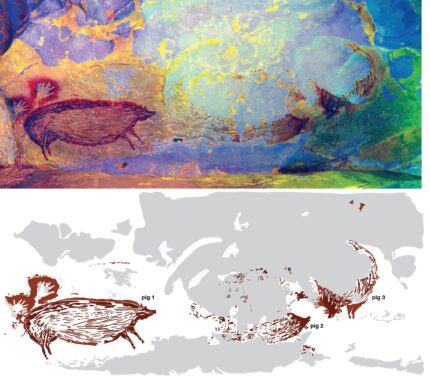 been lost from the natural exfoliation of the cave wall. The complete pig is on the left of the composition facing right towards the two partials who are facing off against each other. A fourth animal, of which very little remains to identify it, is above the pair. Researchers believe it may have been a fourth suid.

Evidence of human habitation of Sulawesi dates at least as far back as the Pleistocene, between 194,000 and 118,000 years ago. It’s not clear whether the folks who painted the pig were anatomically modern humans or another archaic human species like the Denisovans, but there are more than 300 caves and rock shelters with prehistoric wall art on the island. The Pleistocene rock art typically features animals native to Sulawesi — dwarf bovids and pigs — and hand stencils. Of these, pigs are the most popular subjects, present in over 80% of the representations.

The image from Leang Tedongnge, with a firmly established minimum age of 45.5 ka, would now appear to be the earliest known dated artwork in Sulawesi. It also represents the oldest reported indication for the presence of AMH on the island and perhaps in the wider Wallacean region (see below). We infer a similar minimum age estimate for the as-yet undated suid motifs visible on the rock art panel at Leang Tedongnge. As noted, together with the dated figure, these suid images seem to constitute a single narrative composition or scene—perhaps a depiction of social interaction between Sulawesi warty pigs. Furthermore, as far as we have been able to ascertain, the securely dated painting of a Sulawesi warty pig at Leang Tedongnge would now seem to be the world’s oldest surviving representational image of an animal. In addition, this dated depiction of an endemic Wallacean suid may also constitute the most ancient figurative artwork known to archaeology.