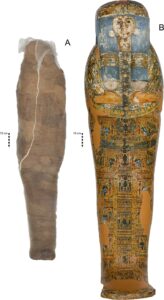 A new study of a 20th Dynasty mummy in the University of Sydney’s Chau Chak Wing Museum has discovered that it was sheathed in a mud carapace. Hardened shells have been found in wrappings before, but the few of them that have been analyzed were found to be resinous layers.  This is the first time a mummy encased in a mud carapace has been found on the archaeological record of Egypt.

The intact, fully wrapped mummy in a painted wood coffin was acquired by Anglo-Australian surgeon, antiquarian and member of parliament Sir Charles Nicholson, probably in Luxor, during his trip to Egypt in 1856-7. He donated it along with the rest of his collection of more than 1,000 ancient artifacts to the University of Sydney in 1860. The inscription on the coffin lid names the owner as one Meruah. The style of the artwork dates it to around 1000 B.C., but the latest study found that the linen wrappers date the mummy itself to around 1200 B.C., give or take a century, which means that whoever sold it to Sir Charles Nicholson put an unrelated mummy inside the coffin to make it a “complete set,” a common practice at the time.

Fragments of the carapace were first extracted in a 1999 study but were believed to be loose pieces of bone found they were made of fine brown clay or mud coated on one side with white plaster painted red with ochre. There are fine particles of organic material, perhaps straw, in the hardened clay, and one fragment has a textile impression on the back that indicates the clay was applied to the linen wrappings when it was still wet.

The CT imaging revealed that the mud was applied in sheets, in some areas multiple layers of them. It covers the mummy literally from head to toe, but there are defects on the carapace on the right side of the body from the mid-sternum that corresponds to post-mortem skeletal damage in the same area. There’s a defect in the carapace on the right leg too, corresponding to a post-mortem fracture of the femoral head, same for the left knee and lower leg. The right arm was also rewrapped. Researchers believe the body was damaged during the mummification process. It was rewrapped and the mud shell applied to make it whole again.

The internal carapace on the mummified individual in Sydney likely fulfilled a threefold purpose. Firstly, it was a form of conservation for a body that had suffered significant post-mortem damage. The time between the mummification of the body, the burial, the first incident of damage, and the application of the carapace is likely to have been brief. Tombs and even simple graves were often robbed within a short time after interment of the deceased, as, despite the significance placed on afterlife beliefs throughout ancient Egyptian history, the obligation of the living to attend to the needs of the dead was generally short-lived in the non-royal context. Those that were responsible for restoring the physical appearance of the mummified body after the first incident of damage were likely no more than one or two generations younger, and it can be assumed that the 14C dating of the linen fragments is also an appropriate range for the carapace. […]

Secondly, the carapace aided the metaphysical transition of the deceased into the afterlife and the sphere of the god Osiris. The mythological experiences of this underworld deity–his death, dismemberment, re-establishment and re-birth–had long been established to serve as a precedent for the mortuary experience of all Egyptians. Like the god, the deceased could also hope for continued existence in the afterlife, when properly prepared. […]  In the case of the individual under study, the integrity of the mummified body had been compromised through post-mortem damage of unknown origin. The subsequent application of the mud carapace, in conjunction with some rewrapping and repacking, would have served to reunify the corporeal integrity of the deceased and ensure their continued association with Osiris. Mud may have been considered particularly effective in facilitating this process, given associations found in the textual and archaeological record between the Osiris’ re-birth and the renewed fecundity of Egypt’s agricultural soil following the Nile inundation.

Thirdly, the need for a restorative carapace on the mummified body may also have provided the opportunity to emulate elite funerary practices, as a form of status display by those responsible for the repair. Resin carapaces on the bodies of elite individuals are attested in the 19th and 20th Dynasties, and even in the 18th Dynasty, the skin of Amenhotep III may have been painted with a layer of resin as suggested by CT scans. […]  Not only did king Rameses V (c. 1147–1143 BC; CG 61085) feature viscera packed in sawdust inside the torso, but the face was also ‘painted an earthy red colour, like that of the mummies of many priests.’ […]

The face was painted red and the whole carapace may have been thus decorated. While resinous shells are recorded on late New Kingdom royal mummified remains, casings made of mud are not thus far scientifically documented and dated. Thus, the mummified individual under study may represent a unique window into the phenomenon of elite emulation in the burial customs of non-royal Egyptians.

4 thoughts on “Mummy found to be encased in mud shell”