The world’s longest Viking longship, the Roskilde 6, is being installed for a new exhibition at the National Museum in Copenhagen that starts June 25th. The Roskilde 6 has been traveling for years, touring Germany, England, Canada and the US. Last Friday it arrived packed in 27 boxes and curators have been piecing it back together. 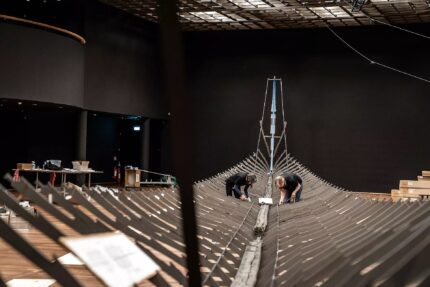 At 37.4 meters (123 feet) long, twice the length of Columbus’ flagship La Santa Maria, it is the longest Viking ship ever discovered. The keel alone is 32 meters (105 feet) long, the longest keel ever found on a Viking ship. It was 13 feet wide at the widest point and had a shallow draught of just 33 inches.

Roskilde 6 was discovered in February 1997 by workers dredging the Roskilde harbor before construction of an extension to the Viking Ship Museum. Nine shipwrecks from the late Viking and early Medieval periods were discovered at the site. Roskilde 6 had been dragged into the shallows and partially dismantled along with a half dozen ships to serve as defensive barriers in the harbor of Roskilde Fjord.

Today about 20-25% of the longship survives, the timbers preserved for centuries in the waterlogged mud of the fjord’s shoreline. Dendrochronological analysis indicates the ship was built after 1025, and the type of oak points to it having been built not in Denmark but in Norway, near Oslo. It was in active use for at least 15 years, as there is evidence of repairs using timber felled from the Baltic area in 1039.

Roskilde 6 was an ocean-going warship, not a ceremonial one like many of the ship burials which were built solely for funerary purposes, and the high quality of its materials and workmanship points to it having been part of the royal fleet. Its large size required adaptations to ensure it would be flexible enough to navigate the choppy water. The keel was actually made of three parts connected by long scarves. The planks of its hull were barely more than an inch thick, which made it comparatively light in weight for its length.  The floor planks were riveted together and half-frames placed on top of them. The keelson, of which a 10-foot section has survived, was fastened to the hull with meticulously carved horizontal double knees.

The ribs over the hull at regular interviews correspond to where the thwarts (the rowing benches the oarsmen sat on) were placed, making it possible to calculate the full length of the warship and the size of its crew. Early Viking ships were small, fitting crews of 40 men. This one had a crew of 100, 80 rowers, two men per oar.

The preserved timbers have been mounted on a steel skeleton to give visitors a realistic view of its impression dimensions when it was intact.