Archaeologists have discovered a Roman-era gallery under the First Courtyard of Topkapı Palace in Istanbul. The gallery was discovered in the course of landscaping works in the lower gardens of the palace. These areas have long been closed to visitors and the Roman gallery was found during underground research as part of the landscape study.

The gallery, of which three sections are extant, begins under the Imperial Gate to the right. A Byzantine-era cistern was previously discovered right above the gallery, and it’s possible the Roman gallery was dedicated to the same purpose or was part of a network of subterranean passageways connected to a cistern that has yet to be found. Constantinople was absolutely bristling with underground cisterns. There were literally hundreds of them, so this could be another one of them, or it could have had another use entirely when first built only to be repurposed as part of a cistern network in the Byzantine era. It is a five-minute walk from the dramatically gorgeous century Basilica Cistern built by Emperor Justinian I in the 6th century.

Construction on Topkapı Palace began in 1459, only six years after the fall of the decrepit Eastern Roman Empire and the conquest of Constantinople by Sultan Mehmed II. Located on a promontory overlooking the Bosporus, it is one of the highest points on the Sea of Marmara and was the site of the ancient Greek city’s acropolis. 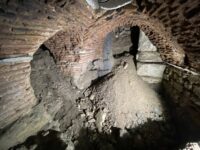 Research is ongoing as the landscaping project continues. While there are no immediate plans for an archaeological excavation of the gallery site, that is possible depending on what the current survey reveals. Ideally, the gallery would be open to the public when the landscaping is complete and the courtyards open, but it will have to be assessed for structural safety before becoming available for tours.