More than 80 bronze mirrors have been unearthed at a 2,000-year-old cemetery in northwest China’s Shaanxi Province. Since excavations began in May 2020, more than 400 graves from the Warring States Period (475-221 B.C.) through the Western Han Dynasty (206 B.C.-9 A.D.) have been unearthed at the cemetery in Dabaozi village, Gaozhuang township. Many of the tombs were looted, but archaeologists have recovered more than 2,000 artifacts, primarily pottery and bronze objects. 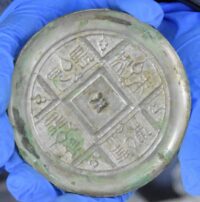 The bronze mirrors mostly date to the later centuries of the Dabaozi Cemetery’s use, from the late Warring States Period to the late Western Han. They are circular and range in size from eight centimeters (three inches) to 22.1 cm (8.7 inches) in diameter. The largest of them is .5 cm (.2 inches) thick. They were found in different tombs, but most of them were in the same location: next to the head or upper body of the deceased. A fragment of silk found by one of the mirrors is believed to be all that remains of a silk bag the mirror would have been carried in when the tomb’s occupant was still alive. Said occupants were both men and women, so the mirrors were markers of wealth and societal status rather than gender.

Differences in the bronze casting process at different times accounts for differences in size and quality, and there are a selection of styles represented. The backs are decorated with geometric motifs, florals, lines and inscriptions including “Eternal Joy,” “Family Wealth” and “Long Memory.” The mirrors are in good condition, some of them even retain much of their original polished. One of them is so shiny you can see still your reflection in it.

According to historical records, in order to ensure the construction and service of the emperor’s mausoleum as well as to better supervise the aristocrats, Liu Bang, founder of the Han Dynasty [r. 202–195 B.C.], set up a centralized residential area for the nobility, which was located about 4 km from the cemetery. Therefore, the ancient tombs are believed to belong to the dynasty’s upper-class residents, according to the researchers.