A unique Roman-era sarcophagus decorated on the inside is undergoing restoration in public view (pandemic permitting) at the Rijksmuseum van Oudheden (RMO) in Leiden. 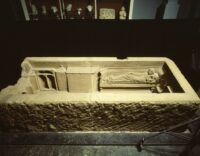 The sarcophagus was discovered in pieces during construction of a home in the Limburger village of Simpelveld in 1930. A hole on one of the short sides of the rectangle attests to it having been looted of valuables, probably during the turbulent Migration Period, but it still contained a few treasures: glass and ceramic vessels, a gold pin, a bead necklace, a stilus (conveying the deceased’s literacy), a silver mirror, a knife, a pair of scissors and three finger rings. The most elaborate is a gold dodecagonal ring inscribed IVNONI MEAE (“To my Juno”). Juno was the goddess of marriage, so it’s possible this was a wedding ring or gift from the deceased’s husband. Amazingly, cinerary remains were found undisturbed as well.

Carved out of a single massive block of local Nivelsteiner sandstone, the sarcophagus is 2.4 meters (7’10”) long, 1.05 meters (3’5″) wide and 76 cm (2’6″) high and weighs 800 kilos (1764 lbs). Carved out of one massive block, the sarcophagus was originally topped by two sandstone slabs fastened to the chest with metal clamps. The lid was found broken into four pieces. Just one of the smaller pieces weighs 282 kilos (622 lbs). 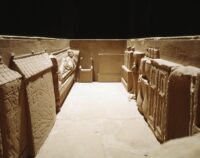 It’s the interior relief that makes it one of a kind. The sarcophagus is carved to look like a room in a luxurious Roman home absolutely crammed with furniture. On one of the long sides an elegant lady wearing a long-sleeves tunic and draped mantle reclines on a lectus. Her hair is dressed in the style of Faustina, wife of Emperor Marcus Aurelius, which suggests a date of between 160 and 180 A.D. To her right on one of the short ends is a wicker chair of a type known as a cathedra chair, common in the Germanic provinces. A large chest on a pedestal is next. This was the arca, the home’s safe, basically, which contained the family’s documents and cash.

Across from the lady is side table on which three glass bottles have been placed. Another table is next to it, this one a small round one with three legs named a mensa Delphica after the tripod stool the Pythian priestess sat on to pronounce the oracles of Apollo at Delphi. Its legs are decorated with lion heads. Another table, a sideboard this time, is next, followed by two shelves holding bronze vessels, and then two tankards on the ground. Then comes a cabinet with two doors and small niches of varied size. Last but certainly not least is a grand house and a smaller associated building. The house and annex are not believed to represent a specific dwelling, but the furnishings are all highly realistic depiction of Roman artifacts that have been found in the Netherlands.

A 2016 study of the cinerary remains (replete with almost 400 bone fragments) was able to confirm that the individual in the sarcophagus was a woman between 35 and 49 years old when she died. There were no lesions or evidence of osteoarthritic changes to the bones, which suggests she lived a life of leisure, and her loved ones didn’t let a little thing like death change her lifestyle. The ashes of this fine lady were laid to rest in the most refined, opulent home a Romanized resident of Germania Inferior could get in the 2nd century. 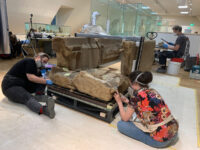 The sarcophagus was acquired by the RMO from the finder immediately after it was unearthed. Museum experts pieced the large fragments together and mounted it on a wooden frame the support its weight and make it easier to move. Three months after its discovery, the Simpleveld sarcophagus was on permanent display. Today it is one of the main attractions of the museum’s permanent The Netherlands in Roman Times exhibition, but after almost a century of use and multiple relocations, the mount has become unstable and the sarcophagus has suffered damage to the old restoration points.

Conservation began in September with a comprehensive assessment of the current condition of the sarcophagus, research into past restorations and X-rays to map the fractures and any metal pins that may have been used to knit the pieces together. Mortar, cement and other additions from past restoration attempts were removed and after much research into the archives, press articles and scholarly publications, the conservation team embarked cautiously on dismantling the sarcophagus into its component fragments.

The live restoration is scheduled to continue at least through the end of August. The sarcophagus is being reassembled and mounted on a new state-of-the-art custom chassis that will support the sarcophagus’ weight and allow it to be moved without percussive shocks or vibrations. You can follow the progress of the restoration on the conservators’ log here. This is a neat time-lapse video of the dismantling process:

One thought on “Unique Roman sarcophagus with interior reliefs conserved”