Hot on the heels of the discovery of the ancient military shipwreck at the site of the submerged Egyptian-Greek city of Thonis-Heracleion, marine archaeologists from the European Institute for Underwater Archaeology (IEASM) have discovered a 4th century B.C. tumulus with beautifully preserved funerary offerings including a wicker fruit basket still containing said fruit. 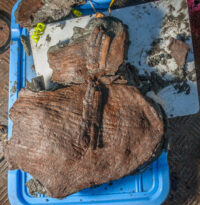 The tumulus was discovered in the north-east entrance canal that connected the port in the basins of the Nile Delta to the Canopic branch of the Nile. It is a large hill about 60 meters long by eight meters (197 x 26 feet) wide that in antiquity would have looked like an island among channels in the basin. The IEASM team unearthed a large number of bronze statuettes, many of Osiris, god of the dead, in the surrounding channels, but on the island itself the deposits were primarily imported Attic red-figure pottery. There were hundreds of ceramic deposits layered thickly on top of each other. Under the tumulus were more deposits, high-end miniature ceramics including mini-amphorae made in Greece.

The team also discovered evidence of burning on the tumulus, a single large burning event, a closing ceremony of sorts, after which the site was sealed and people banned from entry and devotional activities. That was in the 4th century B.C., and Thonis-Heracleion would continue to be Egypt’s primary Mediterranean port for another two hundred years before Alexandria became dominant.

The tumulus, first sealed early and then submerged, preserved organic material as well as pottery and bronze. There was a wooden banquet sofa preserved in very good condition, and wicker baskets still containing grape seeds and doum fruit, the oval fruit of the doum palm, aka the gingerbread tree, a palm tree native to northern Africa. Doum palm trees were sacred in the ancient Egyptians and the fruits were traditional funerary offerings. Doum seeds have been found in the tombs of numerous pharaohs and in 2007, archaeologists found eight baskets of doum fruits in the tomb of King Tutankhamun that Howard Carter had apparently set aside in the treasury room but never documented.

“They have lain untouched underwater (for) 2,400 years, maybe because they were once placed within an underground room or were buried soon after being offered,” IEASM said.

The discovery “beautifully illustrates the presence of Greek merchants and mercenaries who lived in Thonis-Heracleion, the city that controlled the entrance to Egypt at the mouth of the Canopic branch of the Nile,” IEASM said.

One thought on “Wicker fruit basket found in submerged tomb”