A bronze key handle has been discovered to be a rare depiction of execution by lion, the only one of its kind in Roman Britain. The handle was unearthed in 2016 under the floor of a late Roman home in Leicester. It was heavily encrusted with soil, so its complex decoration wasn’t recognized until the handle was cleaned.

The object features a central “barbarian” figure with the characteristic wild hair, thick beard and outfit (trousers worn under a bare chest). A lion is wrapped around his body and bites his head. Beneath them are four nude youths, the older two protectively embracing the younger. It dates to the 2nd century, and is the most detailed representation of damnatio ad bestias, criminals condemned to be mauled to death by wild animals in the arena, ever discovered in Roman Britain.

Many Roman towns in Britain possessed either an amphitheatre or a theatre, where such spectacles could have been witnessed by large crowds. The town house where the key handle was found stands next door to the newly-discovered Roman theatre in Leicester, and it is tempting to think that life did indeed imitate art and that the holders of the key had witnessed such scenes at close quarters.

Lions are portrayed on other key handles from Roman Britain and probably symbolised security and the protection of the household. This sense of security extended beyond the life of the key as a functional object, as the detached handle clearly continued to be valued. It was placed upright in the makeup of a new floor laid long after the heyday of the opulent house it had once secured, in the hope that it would still offer protection.

[University of Leicester Archaeological Services] post-excavation manager and co-author, Nick Cooper, added that the key handle was one of the most significant finds from Roman Leicester and would be displayed to the public at Jewry Wall Museum in Leicester, following completion of major refurbishment work expected to be completed by 2023. 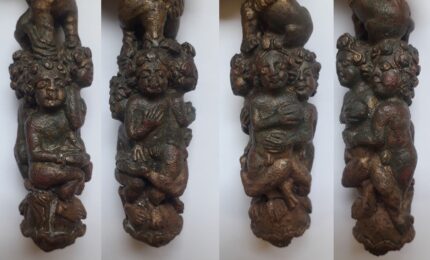