Excavations in Murviel-lès-Montpellier in the Occitanie region of southern France have unearthed the remains of a large building with a pot of Roman Republic coins secreted in one of its walls.

Initially founded in the beginning of the 2nd century B.C. by the Samnagenses, a Gallic people mentioned in Pliny the Elder’s Natural History, the oppidum of Altimurium was a fortified settlement was built on a hill that would later become known as Castellas. At its height, the town covered almost 30 hectares encircled by a monumental wall. It was divided into an upper town on the flat summit and several terraces below, and the lower town on the gentle slope at the bottom of the hill. Where the upper and lower town met was a large forum with two porticos and colonnaded public buildings.

The ancient town was absorbed into the territory of its much larger neighbor, the Roman colony of Nemausus, modern-day Nîmes, in the 2nd century, and thereafter suffered a rapid decline. The oppidum was abandoned by the middle of the 3rd century and was never rebuilt. The current town of Murviel-lès-Montpellier was founded in the 11th century on a hill to the south of Castellas.

This season’s excavations focused on the lower town enclosure dating to around 100 B.C. in advance of planned home construction in the area. They found the first defensive ditch ever discovered at the site and the only evidence of a road in the lower town. They also found a medieval burial ground, but most notably a building of yet undetermined function built in the 1st century B.C. 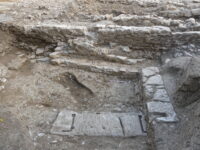 The remains consist of a large threshold stone and carefully constructed walls with some traces of surviving plaster. A bench was built into the wall adjacent to the threshold. A second room featured a concrete floor. This structure was extensively redeveloped in the early 1st century A.D., creating a large building with three wings built around a central courtyard. A dolium, a large storage amphora, was found embedded in a basin in a room that had been used one time (and only one time) as a forge. A room in the south wing was employed as a forge, not just 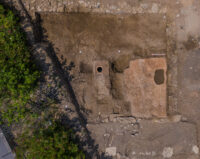 once but consistently. Two hearths and large quantities of associated detritus were found. The design of the building and the evidence of different types of work having taken place within its walls indicate this was not a dwelling. A large open space in front of it suggests the building may have been open to the public.

A small pottery vessel containing 20 silver denarii of the Roman Republic was unearthed in the demolition layers of this building. Archaeologists believe it may have been hidden in the earthen walls of the room that were destroyed during the reconstruction. The coin hoard survived by a fluke.