Tiles stamped with the imperial mark have been discovered at the Roman bathhouse on the grounds of the Carlisle Cricket Club in Stanwix, a suburb of Carlisle. Roman tile manufacturers put their brand on their products as a matter of course, and many surviving tiles bear their makers’ marks, but the IMP stamp is extremely rare. An usually large number of them — about a dozen — have been unearthed at this site.  The high concentration of IMP tiles suggest they were being manufactured there.

“This is the imperial court stamping the tile. There have been a handful found in Carlisle at random places. We have probably got a dozen now from this site and it looks like this is where they are coming from.

It’s not a legion or anyone else – this is the signature of the Emperor. It’s been built by the imperial machine and it’s a connection.

The remains of the bathhouse were first discovered in 2017 during an archaeological survey at the proposed site of the club’s new pavilion. The expectation was they’d find a few scattered objects among the fill, but instead archaeologists landed upon entire rooms from a bathhouse complete with walls, painted plasterwork, intact floors, tile stacks for the hypocaust system, lengths of terracotta water pipes and a varied assortment of small artifacts like hair pins, coins and arrowheads.

It was a deluxe facility in the hinterlands of the northern border, and not meant for private citizens to take their ease, but rather to serve the men of the Ala Petriana, an elite cavalry regiment famed for its valor on the field that was stationed at Uxelodunum, the largest fort on Hadrian’s Wall.

Uxelodunum is modern Stanwix, today absorbed into the town of Carlisle which at that time was the Romano-British town of Luguvalio. The Romans had built a fort in the town earlier (ca. 72-3 A.D.) and when Emperor Hadrian ordered construction of the wall that would bear his name, the old Luguvalio fort was integrated into it, linking the town to the shiny new fort with all the amenities at Uxelodunum.

A carved sandstone slab inscribed with a tribute to Julia Domna, wife of Septimius Severus and mother of Caracalla. Both emperors personally led military campaigns in Britain, and Septimius actually died in York, 40 miles south of Carlisle, in 211. Between the inscription and the IMP tiles, it seems Uxelodunum had a direct link to the ruling family.

“I can’t say that Septimus Severus ever set foot in Carlisle. Who knows.

“All we can say is that we have got a huge monumental building that has been built in Carlisle. The Emperor was in Britain at that time, we’ve got an inscription from his wife in the building and we have got his personal workshop-stamped tiles coming from the building.

“The evidence is building up that there is something really special going on here.” 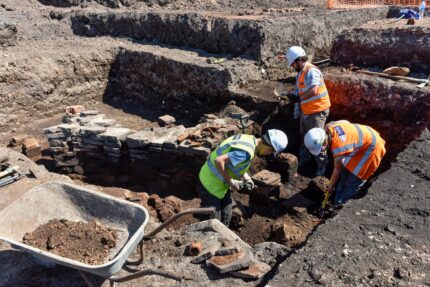 2 thoughts on “Tiles with Roman imperial mark found at Carlisle”