The well-preserved remains of a Bronze Age settlement have been discovered in Sartène, Corsica. The site, located on a hillside overlooking the Rizzanesi river, was excavated in late 2019, early 2020 in advance of housing construction. State archaeologists unearthed the material remains of three dwellings that were part of a fortified village from the early Bronze Age (ca. 2000 B.C.). 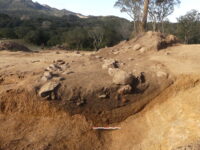 On the southern slope of the hill, the most exposed to an attack, archaeologists found evidence of three phases of defensive fortifications. In the first phase, wooden palisades were erected in several rows. In phase two, the village dismantled the palisades and dug a triangular ditch. Behind the ditch, an earthwork rampart was built and a single palisade erected at its peak. The ditch from this system was filled in around 1500 B.C. and a double dry stone wall filled with smaller stones was built on top of it.

Archaeologists estimate the village covered more than a hectare (2.4 acres) in area and contained an estimated dozen dwellings. The remains of the dwellings that have been excavated thus far include heretofore unknown details about life in Bronze Age Corsica.

The discovery of the roof rafter installation trenches as well as the discovery of the sand pits allow us to observe the structuring of the internal space of the houses. Divided into three rooms and bounded by a dry stone masonry base, these extend over an area of ​​approximately 50 m². The study also shows that some houses were built entirely of wood.

In addition, the archaeologists observed that the subsistence economy of the village was based on the cultivation of cereals in the surroundings, on the picking of acorns and on livestock. The meats were then smoked to be stored for several months. Silos and silage jars (buried in the earth) were used to store these commodities. Finally, craftsmanship is materialized by a discreet metallurgy and by the presence of stone ornaments and dishes.