The Artaxata area has been settled since the 5th–4th millennia B.C. The city was founded around 180 B.C. by King Artashes-Artaxias I as the capital of the Kingdom of Armenia, and it remained the administrative center of Armenia well into the 5th century A.D., even after its conquest by Persian king Shapur II in 369 A.D.

Rome’s attempts to conquer Armenia were less successful. Nero captured Artaxata in 58-59 A.D. and installed Tigranes VI as a client king, but the Romans were defeated and Nero signed a peace treaty in 63 A.D. Rome even sent money and architects to help rebuild Artaxata. The terms of the treaty kept Armenia independent for almost 50 years until Trajan broke the treaty in 114 and invaded.

Trajan, under whose rule the Roman Empire reached its greatest geographical extent, annexed Armenia and established the imperial province of Armenia Major with the Artaxata as the capital. Trajan moved on with his Parthian campaign and by 116, Armenia was rife with anti-Roman insurrection activity. After Trajan’s death in 117, his successor Hadrian cut the empire’s losses and pulled out of Armenia. 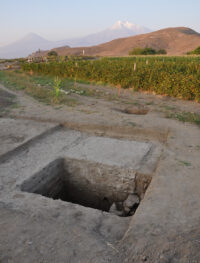 An international team of archaeologists from the University of Münster and the National Academy of Sciences of the Republic of Armenia found the aqueduct remains during an excavation of the lower city of Artaxata, located on a plain east of the Khor Virap hillock (famed for its medieval monastery). After a geophysical survey identified architectural remains in a regular, linear layout typical of arched aqueducts, the team dug trenches following the line.

The first trench revealed a monumental rectangular block of opus caementicium, then a second block six feet away. They are both more than seven feet wide. Two more opus caementicium blocks were found in another excavation trench, both more than eight feet square. These pillars are rougher in texture than the first two, and contain more inclusions of larger stones.

The foundation piers have shorter intervals between them than usual — the larger the arch span, the more efficient the construction — and are unusually deep. These adaptations were made to accommodate the Artaxata’s terrain which is highly seismic and wet. Only the foundations were built. There is no rubble or any evidence of construction above the piers. The aqueduct died with Trajan.

“The planned, and partially completed, construction of the aqueduct in Artaxata shows just how much effort was made, in a very short space of time, to integrate the infrastructure of the capital of the province into the Empire,” says co-author Torben Schreiber from the Institute of Classical Archaeology and Christian Archaeology at the University of Münster.

The find has been published in the journal Archäologischer Anzeiger and can be read in its entirety here.