Archaeologists have discovered arms and armature used in a seminal 6th century B.C. battle at the ancient city of Velia in the Campagnia region of southwestern Italy. Two bronze helmets in perfect condition and numerous fragments of weapons including a shield were discovered on the Acropolis of Velia in the deepest archaeological layer dating to the city’s founding around 538–535 B.C.

The city was founded by Greeks from Phocaea, the survivors of one of the first large-scale naval battles in history. The clash took place off the

southern coast of Corsica in sometime between 541 and 535 B.C. The Phocaean Greeks had founded the city of Alalia (modern-day Aleria) in 566 B.C. and the Etruscans and Carthaginians objected to the Greek incursions into their Mediterranean territories. It came to watery blows in 540 B.C. when a fleet of 60 Greek ships faced off against 120 ships in the allied Etruscan and Punic fleet.

According to Herodotus the Greeks managed to eke out a victory of sorts, but it was Pyrrhic as they lost the vast majority of their ships and were forced to evacuate Corsica. The Etruscans took Corsica and Carthage maintained its hold on its Sardinian territories. The Phocaeans sought refuge in southern Italy, founding the city of Hyele, renamed Velia by the Romans. 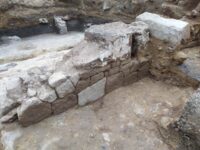 unearthed a rectangular structure 60 feet long and 23 wide with a beaten clay floor dating to the city’s founding between 540 and 530 B.C., predating the Temple of Athena by at least 50 years. Archaeologists found painted ceramics with the word “Ire” (“holy”) scratched into the surface, marking them as votive offerings left in the sacred space.

The bronze helmets were found in the same space. One is Etruscan of the Negau or shell type. The other is a Chalcidian type helmet.

That is, in fact, the biggest surprise: “They are reliquaries offered to Athena, with all probability the very spoils from the Battle of Alalia,” says Osanna, who pending the installation of the new site director, Tiziana D’Angelo, has taken on the running of the Park over the last year.

These are, of course, only preliminary considerations. Freed from the earth only a few days ago, the two helmets must now be cleaned in the laboratory and studied. There may be inscriptions inside them, something quite common in ancient armour, and any inscriptions could help reconstruct with precision their history and, who knows, also perhaps the identity of the warriors who wore them. […]

It is almost certain that the foundation of the temple in this process was to be considered of crucial importance for the success of the new settlement and that the memory of the bloody battle was still very fresh, so much so that they decided to offer the goddess, in order to propitiate her benevolence, the weapons they had stripped from their Etruscan enemies in that epic clash on the sea which in fact changed the balance of power in the Mediterranean. 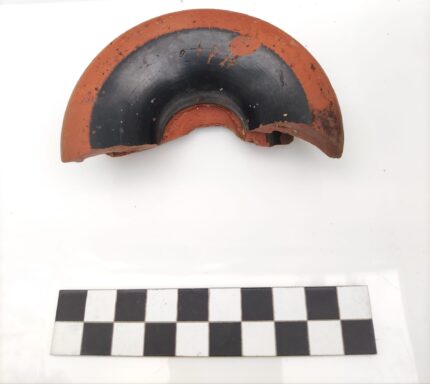 One thought on “Helmets from 6th c. B.C. battle found”