The British Museum’s new The World of Stonehenge exhibition will feature a new find of national importance: a cylindrical carved chalk sculpture discovered in a Neolithic children’s grave near the Yorkshire village of Burton Agnes. One of only four known examples, the sensational find was made in 2015, but was not announced until now. The curator of the landmark Stonehenge exhibition is describing the object as the “the most important piece of prehistoric art to be found in Britain in the last 100 years.”

The drum-shaped cylinder of solid chalk decorated with elaborate geometric designs was discovered during an excavation at a site slated for development of a renewable energy plant. A geophysical survey revealed two barrows, one circular, one square. When the circular barrow was fully excavated, archaeologists found an intact central burial containing the skeletal remains of three children. The two smallest children were holding each other while the eldest’s arm was around the little ones. The chalk drum was placed against the head of the eldest of the three.

Radiocarbon dating of the human remains established that the children died between 3005-2890 B.C. This was the same time Stonehenge was being built. Also found in the grave was a polished bone pin and a chalk ball, artifacts that have been found in excavations of Stonehenge as well.

from Burton Agnes in Folkton in 1889. They too were discovered next to the remains of a child. At the time they were found, the drums could not be absolutely dated, but given the new discovery, the estimated age of the Folkton Drums is now 500 years older than previously thought. The Burton Agnes Drum and the Folkton Drums will be displayed together in the new exhibition.

Neil Wilkin, curator of The World of Stonehenge at the British Museum, said the discovery was “truly remarkable”.

“The Folkton drums have long remained a mystery to experts for well over a century, but this new example finally begins to give us some answers. To my mind, the Burton Agnes drum is even more intricately carved and reflects connections between communities in Yorkshire, Stonehenge, Orkney and Ireland,” he said.

“The discovery of the Burton Agnes grave is highly moving. The emotions the new drum expresses are powerful and timeless, they transcend the time of Stonehenge and reflect a moment of tragedy and despair that remains undimmed after 5,000 years,” he added.

Believe it or not, The World of Stonehenge is the UK’s first major exhibition dedicated to the history and wider context of the great stone circle. More than two thirds of the objects going on display are loans from 35 different institutions in the UK and Europe. They include the world-famous Nebra Sky Disc, reputedly the oldest known map of the stars in the world, one of Scotland’s mysterious carved stone balls, the astonishing Bronze Age gold sun pendant found in Shropshire, and an actual full-on henge. The 4,000-

year-old Bronze Age timber circle known as Seahenge, a circle of 54 oak posts surrounding an overturned tree stump preserved for millennia in the sands of a Norfolk beach, is on loan for the first time from the Norfolk Museums Service. A small part of it has been on display at the Lynn Museum in King’s Lynn, but the British Museum exhibition will include many elements that have never been shown to the public before. The exhibition runs from February 17th through July 17th of this year. 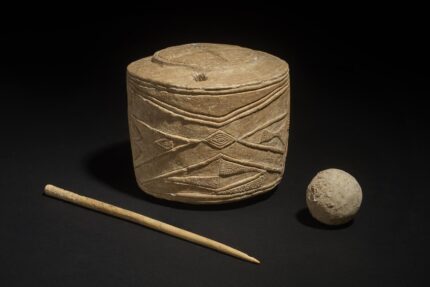