The complex was discovered near sites known as “Desert kites,” gigantic traps used by the Neolithic population for the mass hunting of wild gazelles. They consist of at least two long guiding walls that converge towards each other, narrowing down like a funnel and culminating in an enclosure at the end. The walls can be several miles long and some of them are daisy chained into massive contiguous structures. Pottery fragments found at the Jibal al-Khashabiyeh desert kites date them to around 7,000 B.C., making them the earliest known large-scale structures built by humans.

Desert kites are found throughout the Middle East from Saudi Arabia to Turkey and extending into southwest Asia. The Jibal al-Khashabiyeh ritual complex is the first archaeological evidence of a human occupation area directly connected to desert kites. The gazelle hunters, dubbed Ghassanians, employed the ritual complex as a campsite where they lived, worked and butchered their kill. They dwelled in circular huts, made razor-sharp stone knives and used them to process the gazelles captured in the desert kites. The huge quantity of gazelle bones found at the shrine confirms that they were highly effective and specialized hunters whose nutritional, economic and even religious lives revolved around gazelle trapping.

The site was found in an excellent state of preservation last October. It consists of two free-standing stele with human-like faces carved on them. The tallest of the two is about 3.7 feet high and is carved with a representation of the converging guide walls of a desert kite along with the human face. The smaller one is 2.3 feet high and finely modeled. Behind the 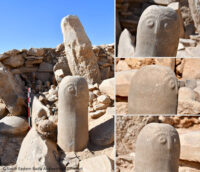 stones was a carefully laid-out deposit of 150 marine fossils, many of them arranged vertically and placed in a specific orientation. The deposition field also includes stones of different shapes and sizes and artifacts like animal figurines, meticulously crafted flint objects and an altar stone associated with a hearth.

As if all this weren’t astonishing enough, the deposits and altar were installed inside a small-scale model of a desert kite built with stones in the middle of the campsite. This is the only Neolithic architectural model ever discovered. 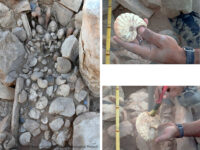 The ritual nature of the deposit is compelling including an unexpected use of natural marine fossils in the symbolic and spiritual realm through the Neolithic. The altar and associated hearth suggest that some kind of sacrificial offerings must have been involved in the ritual process. The reminiscence of symbolism referring to the “Desert kites”, evidenced by the depiction on one of the steles and even more in the three dimensional architectural model at the core of the installation indicates that mass hunting using the “Desert kites” was at the root of the ritual activities involved. The sacral symbolism and ritual performance evidenced were most likely devoted to invoke the supranatural forces for successful hunts and abundance of preys to capture. In this respect, the discovered installation is not only unique due to its exceptional state of preservation, but also due to the fact that it sheds an entire new light on the symbolism, artistic expression as well as spiritual culture of these hitherto unknown Neolithic populations specialized in mass hunting of gazelles using the “Desert kites”.