A new study of the famous Venus of Willendorf figurine has determined that the oolitic limestone it was made from originated near Lake Garda, northern Italy, 400 miles and a whole bunch of Alps southwest of where it was found in Austria.

The statuette was carved from a single piece of oolitic limestone and painted with red ochre by the Gravettian hunter-gatherer peoples who spread throughout Paleolithic Europe. It is faceless female figure with exaggerated volume in the breasts, buttocks, belly and thighs. The head is wrapped in an elaborate curled hairdo or headdress.

More than a hundred of these female figures with hypertrophic sex characterstics have been discovered at Gravettian hunting camps from Portugal to Siberia. This one was discovered in 1908 on the left bank of the Danube near the town of Willendorf in Lower Austria. It was found in an archaeological layer associated with Upper Paleolithic Gravettian industry, which dates it to around 30,000 years ago.

There is no native oolitic limestone in the Willendorf area, and even back in 1908 the archaeologists who excavated it hypothesized that the raw material had come from elsewhere. They thought maybe the Vienna Basin, which is fairly close by, was the source. Scholars since then have posited other possible locations, but it wasn’t possible until now to analyze the interior of the stone for a conclusive answer to the question of its origins.

A multi-disciplinary team of archaeologists and geologists from the University of Vienna and the National History Museum in Vienna turned to new high-resolution micro-computed tomography scanning to investigate Venus’ insides. They were able to scan it at a microscopic level of detail. The team then acquired an array of oolite samples from west to east from France to Ukraine and north to south from Germany to Sicily. The samples were sliced and examined under the microscope.

The tomographic data from the Venus showed that the sediments were deposited in the rocks in different densities and sizes. In between there were also small remnants of shells and six very dense, larger grains, so-called limonites. The latter explains the previously mysterious hemispherical cavities on the surface of Venus with the same diameter: “The hard limonites probably broke out when the creator of the Venus was carving it,” explains [University of Vienna anthropologist Gerhard] Weber. “In the case of the Venus navel, he then apparently made it a virtue out of necessity.”

Another finding: The Venus oolite is porous because the cores of the millions of globules (ooides) of which it is comprised had dissolved. This is a great explanation for why the resourceful sculptor chose this material 30,000 years ago: It is much easier to work with. The scientists also identified a tiny shell remnant, just 2.5 millimeters long, and dated it to the Jurassic period. This ruled out all other potential deposits of the rock from the much later Miocene geological era, such as those in the nearby Vienna Basin. 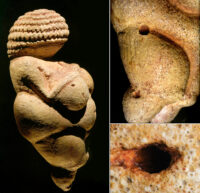 The research team also analyzed the grain sizes of the other samples. Hundreds, sometimes even thousands of grains were marked and measured with image processing programs or even manually. None of the samples within a 200-kilometer radius of Willendorf even remotely matched. The analysis finally showed that the samples from the Venus were statistically indistinguishable from samples from a location in northern Italy near Lake Garda. This is remarkable because it means that the Venus (or at least its material) started a journey from south of the Alps to the Danube north of the Alps.

The Gravettians were mobile, moving to follow the best prospects for game and good weather. They moved over long distances, likely following rivers. There is no easy river route from Lake Garda to Willendorf. They would have had to either loop around the Alps or through them. We don’t know if such an Alpine crossing, arduous even in the best of conditions, was possible 30,000 years ago as the Last Glacial Maximum loomed.

The statistics clearly point to northern Italy as the origin of the Venus oolite. Nevertheless, there is another interesting place for the origin of the rock. It is in eastern Ukraine, more than 1,600 kilometers linear distance from Willendorf. The samples there do not fit as clearly as those from Italy, but better than all the rest of the sample. An interesting connection here: Venus figures were found in nearby southern Russia, which are somewhat younger, but look very similar to the Venus found in Austria. Genetic results also show that people in Central and Eastern Europe were connected to one another at this time.

The study has been published in the journal  Scientific Reports and can be read in its entirety here.

4 thoughts on “Venus of Willendorf originated in Italy”