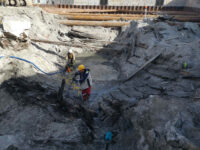 A 13th century merchant trading vessel of the Hanseatic League has been unearthed during construction work in downtown Tallinn, Estonia. Found under a highway, the vessel is a cog, the workhorse of the Hanseatic League’s shipping networks across the North and Baltic seas. Dendrochronological analysis dates to the wreck to 1298.

The cog was the primary ship used by Hanseatic merchants. The single-masted vessel had a flat bottom and no keel so it could move through shallow waters and was easily maneuvered by a small crew, even when laden with up to 90 tons of cargo. They could be built quickly at low expense and could even be armed for defense when pressed.

They ranged in size from 15 to 25 meters (50-82 feet) long, so at 79 feet long and 30 feet wide, the Taillinn cog is at the very top of the range. It was a clinker-built boat — made of overlapping oak planks sealed with animal hair and tar.

The area where the ship was found was underwater for centuries. When it sank near the mouth of the Härjapea River (a waterway that no longer exists today) 800 years ago, the spot was under seven feet of water, and the ship was quickly covered by the shifting sand ridges. The site was still submersed in the 18th century.

The waterlogged environments preserved the organic materials. The ship is in excellent condition with oak boards intact up to 10 feet from the bottom. Archaeologists have also recovered wool used for packing cargo, tools and leather shoes. In preservation it is comparable to the Bremen Cog, found during dredging operations in Bremen, Germany, in 1962 and now on permanent display at the German Maritime Museum in Bremerhaven. The Taillinn cog is larger and 82 years older than the Bremen Cog.

The ship will have to be be removed from the find site so that construction can continue. Unfortunately it is too big to be removed in one piece. It will be taken out in sections, conserved and reconstructed either at the maritime museum in Taillinn or the wreck preservation area in Tallinn Bay

One thought on “13th c. Hanseatic ship found in Tallinn”