Archaeologists have discovered the remains of a Roman military watchtower in the ancient city of Volubilis, northern Morocco. The foundations and walls up to 80 cm (2’8″) high are still standing, as is a section of an internal staircase and some of the cobblestone pavers around the structure. The team also unearthed fragments of pilia (Roman spearheads), nails from caligae (military hobnailed sandals) and Roman military belt fittings. Roman observation towers have been found before in Scotland, Germany and Romania, but this is the first one found in Morocco.

“On the basis of satellite images, we selected several sites that have a common feature: an oval plan with a rectangle or a square inscribed in it. We chose this particular site because it is located farthest to the south. there could be a place associated with the presence of the Roman army “- says Maciej Czapski, archaeologist, PhD student from the University of Warsaw and a member of the Polish-Moroccan research group in an interview with PAP.

The scientist adds that dozens of hours spent in libraries in Rimini and London were part of the preparations for the excavation work. However, the effort put into reading the already published materials in conjunction with the analysis of satellite images did not guarantee success – he reserved.

“We were lucky to start digging in the right place, because a 500-600 m shift of the starting point would result in hitting the void. Our discovery is a significant contribution of knowledge to the overall state of research on the Roman limes – a system of Roman border fortifications, erected on the outskirts of the empire, especially vulnerable for raids – said Czapski.

Built at the foot of Zerhoun mountain, the city of Volubilis was founded in the 3rd century B.C. by Carthaginian colonists. It was part of the kingdom of Mauretania (at one point it was the capital) ruled by a dynasty of Berber kings allied with Carthage. After the fall of Carthage at the end of the Third Punic War in 146 B.C., Volubilis was annexed by Rome along with all the other North African colonies. Mauretania itself became a client kingdom of Rome. After the death without heir of King Bocchus II in 33 B.C., the Romans installed a puppet king on the throne and the kingdom limped along as a vassal state until Mauretania was finally annexed outright by Claudius in 44 A.D. and divided into two provinces. 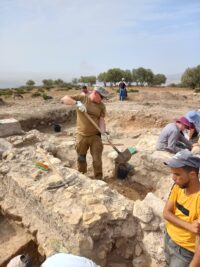 The city prospered under Rome, exporting its agricultural commodities — grains, olive oil — and supplying wild animals for gladiatorial combat. It was at the very periphery of the empire’s borders, however, and tensions with the Berber tribes around the Romanized city rose so precipitously that Marcus Aurelius (r. 161-180 A.D.) had massive circuit of defensive walls built around it. Roman rule ultimately collapsed around 280 A.D. during the political and military chaos of the Crisis of the Third Century. Volubilis itself collapsed in an earthquake in the late 4th century.

The watchtower has not been conclusively dated yet. Defenses were built and maintained at the site between the 1st and 3rd century A.D., and archaeologists hypothesize that it may date to the reign of Antoninus Pius (Marcus Aurelius’ predecessor, r. 138-161 A.D.). Epigraphic evidence points to increasingly turbulent relations between the Berber population and the Roman administration at this time, bad blood that would come to a boil in Marcus Aurelius’ reign.