An 8th-century pure gold leaf artifact intricately carved by the finest craftsmen of the Silla Dynasty (57 B.C.–A.D. 935) was unveiled in all its minute glory this summer six years after its discovery in Gyeongju, South Korea.

The tiny treasure was first unearthed in October 2016 at the Donggung Palace in Gyeongju, the ancient capital of the Silla Kingdom. It was in two pieces found about 65 feet from each other. Each piece had been crumpled up into a tiny little nugget smaller than an adzuki bean. Still caked with dirt when they were recovered, the fragments weren’t recognized as two adjacent pieces of a single artifact until after conservators cleaned them, unfolded them and viewed them under a microscope. It took a year for the patterns to be seen, six months just to unfold the leaf.

The unfolded and rejoined gold leaf measures 3.6 cm (1.4 inches) wide, 1.17 cm (.5 inches) long with a thickness of just .04 mm, thinner than a single sheet of printer paper. The total weight is .3 grams. Electron microscope analysis found that the gold is 99.9% pure with close to zero trace elements. Today gold of that purity can be refined comparatively easily, but in 8th century Korea, it would have been extremely challenging. The average purity of gold found in Silla tombs is 80-89%. 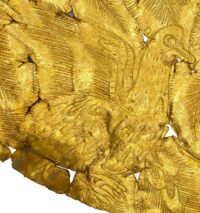 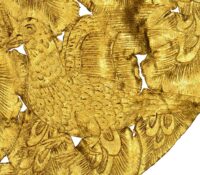 Engraved on the surface is flower in bloom flanked by two birds which judging from the shape of their heads and toes are turtle doves. The bird on the right has more neck feathers in a more vivid pattern and the direction of the tail feathers indicate Right Bird is male. Male and female doves were often paired as symbols of love and fidelity. 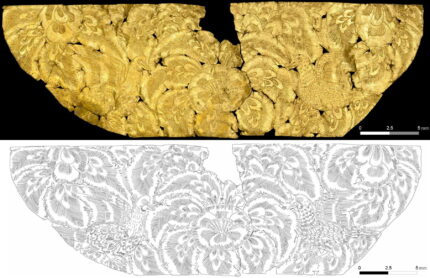 The images were carved with a steel stylus creating lines less than .05 mm thick, thinner than a human hair (ca. .08 mm thick). The gaps between the lines are less than .1 mm thick. The design was so small that archaeologists didn’t recognize its fine detail and superlative quality until it was examined with a microscope. This is by far the most sophisticated example of Silla metalwork ever discovered in Korea.

The flower designs, known as “danhwa” (a design reminiscent of a flower viewed from above, created by arranging various patterns into circular shapes), were carved around the birds and on the center of the gold leaf.

Researchers who took part in the excavation and conservation process explained that danhwa is a binding motif of the Unified Silla Period. “It is seen on decorations of gilt-bronze Buddhist scripture cylinders at the Garden Site in Guhwang-dong, Gyeongju, and the gilt-bronze phoenix decorations found at the temple ruins on the west side of the Hwangnyong Temple Site,” they explained. 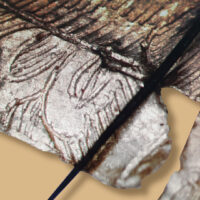 Archaeologists consulted with contemporary artisans and they stated that they would be unable to reproduce so fine a pattern on gold leaf by hand with the tools and technologies they use today. How the Silla masters were able to achieve this kind of detail we don’t know. No magnifying glass from this period has ever been found, nor do any references to them appear on the historical record. The closest cognate is a crystal carved into a convex form found at Bunhwangsa Temple in Gyeongju. Its size and focal properties preclude the crystal from having been used as a magnifying glass itself, but it is evidence that the artisans of the Unified Silla period could have had access to magnifiers. They had to have used something because there are almost no overlaps among all those teeny tiny lines.

It is not clear how the gold leaf was originally used. It was engraved first and then the edges cut to a trapezoidal shape around the decoration. That suggests it was the end cap of an object with a trapezoidal cross section, but evidence of how it may have been mounted is hard to find on so tiny a piece and there are no similar artifacts on the archaeological record to use as comparison. It may also have been crafted to stand on its own as an offering to the gods.

The gold leaf has been scanned and digitized. Click here to virtually explore the gigapixel scan of the 1,700-year-old gold leaf in extreme detail.