An excavation of a Gallo-Roman sanctuary in the village of Saint-Just-en-Chaussée in northern France has revealed a series of vast enclosures, dwellings, offerings and burials that sheds new light on the religious practices of Belgian Gaul before and after the Roman conquest. Some parts of the sanctuary were excavated in 1994-5, but a thorough, systematic investigation of the site only took place starting in 2007 in advance of development. More than 2.5 hectares were excavated, but the sanctuary extends beyond that by several more hectares.

The sanctuary was built during the Second Iron Age (450-50 B.C.) and artifacts point to it having been in active use from the 1st century B.C. until the 3rd century A.D. It was on the northern slope of plateau that

dominated the plain below. The builders made it dominate even more by digging a huge enclosure ditch 10 feet wide and five feet deep and using the soil to build a high embankment. The perimeter ditch was filled with animal remains — pigs, horses, oxen, sheep, goats, cows — that were sacrificed and in some cases consumed in ritual banquets. The skeletal remains of horses were placed in the ditch after the bodies had begun the process of decomposition elsewhere. The skulls of cattle, on the other hand, had been exposed to the elements for a long time before being deposited.

Within the perimeter enclosure are several more enclosures surrounded by ditches. It seems these enclosures were dedicated to different practices as each ditch contained different kinds of offerings. The ditches on the west of the site contained weapons and armature. Elements from eight shields, including handles, bosses and orles (the border around the edge of a shield) were unearthed there. They bore of evidence of having been deliberately damaged before deposition. Archaeologists also unearthed three Port-type helmets (a sort of round beanie shape with cheek flaps forged from a single sheet of iron), an incredible jackpot considering there are only around 10 known to exist in total.

An unprecedented sixty pieces of plate armor made from riveted sheet iron were discovered in the ditches, including a segmented cuirass, forearm, upper arm and shoulder protection. The corrosion materials have some organic remains trapped inside them that will be analyzed to identify whether they were leather, linen, felt, etc. fittings. Whether they saw battle is not evident on the arms, but it’s likely they were collected from a battlefield, then ritually broken (flattened, cut, torn, struck) and scattered into the ditches. Archaeologists believe from the distribution of the objects that elements that when in use would have been used together were deliberately separated from each other.

Then there was the dining area. The team discovered four pits from the middle of the 1st century B.C. that had been dug into the soil. These proved to be in-ground benches with a table about three feet wide between them. The table had a fireplace built into it and the benches were lined with wood for comfort. There was sitting room for about 50 people. Chemical and soil analysis found copious spilled wine, fatty meats from non-ruminants and the remains of a pancake, so this was likely to have been a banquet site. 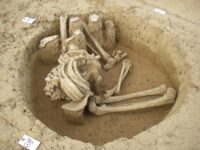 The human burials also appear to be ritual deposits, both as primary burials (individuals were only buried once where they were found) and secondary burials (originally buried somewhere else and the remains moved after decomposition). The excavation unearthed eight primary burials. The deceased were placed in a seated position inside round pits. They were propped against the sides of the pits ; six of them had their right lower legs bent. All of their skulls were missing, perhaps destroyed by agricultural activity as it is certain the bodies were intact when they were deposited. The pit was not filled; decomposition happened in the open.

In addition to the articulated interred remains, 899 bone fragments from about 15 individuals were found in some of the pits and ditches at the site. They had been deliberately crushed. Evidence of blows and cuts have been found on some of the fragments, including on the skulls which may have been left behind when people removed the face of the deceased to make a mask out of it. (Yes, this was a thing in Belgian Gaul at the time.) The bone fragments date to between the beginning of the 2nd and the end of the 1st century B.C.

What differentiates this site from sanctuaries known in Belgian Gaul is the distribution of the remains, according to their nature, in space. In the ditch where the animal bones are, there is little or no metal, conversely where the iron objects are concentrated, there are only a few bones. The distribution of human deposits also shows differences, on the one hand burials of adults in a seated position, bone remains testifying to work on the cranial boxes, others deliberately crushed, heated, and on the other limbs which were disarticulated and defleshed.