Archaeologists excavating an ancient burial mound in Habikino, Osaka Prefecture, southern Japan, have discovered the remains of the tallest haniwa statue ever found. Haniwa statues are large, hollow funerary markers typically made of unglazed clay that topped the characteristic tomb mounds of the Kofun Period (ca. 250-538 A.D.) in Japan. Wooden examples are extremely rare. This one is a towering 3.5 meters (11.5 feet) tall, three feet more than the second tallest. Just under 30 inches wide at the widest point, which makes it not just the tallest, but also one of the largest overall. 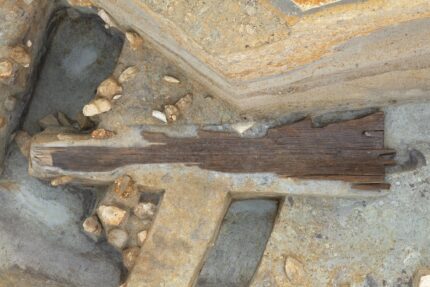 The wooden haniwa was unearthed from the moat surrounding the Minegazuka Kofun, a keyhole-shaped burial mound 315 feet long that dates to the late 5th century. It is part of the Mozu-Furuichi Kofun Group, 49 Kofun Period tumuli that have been designated a UNESCO World Heritage Site for the variety and richness of material from 3rd to 6th century Japan.

The statue is an Iwami-style haniwa, which “has only been found at 15 kofun tumuli in Japan so far,” according to an official of the education board.

“The haniwa is a very rare artifact as it is made of kōyamaki (Japanese umbrella pine), which was a type of wood favored by people in power at the time,” the official said. […]

“Wooden haniwa made out of kōyamaki, which can be logged in only a few areas in Japan, have only been found from kofun tumuli in the Kinki region and are extremely few in number,” said Hiroaki Suzuki of the Nara Prefectural Government’s cultural property preservation division, who is familiar with wooden haniwa.

The earliest haniwa were cylindrical, jar or bell-shaped, made by stacking coils of clay. In the early 4th century, house-shaped haniwa developed and were placed on top of kofun along with cylindrical ones. By the middle of the 5th century, figural forms emerged. Haniwa shaped like objects (swords, shields, quivers, parasols) people (priests, warriors, maidens) and animals (horses, dogs, boars, ducks) were arrayed in lines or groups around the edges of the mounds, likely depicting ritual scenarios. Haniwa are important sources of Kofun period clothing, hairstyling, weapons, tools and architecture. 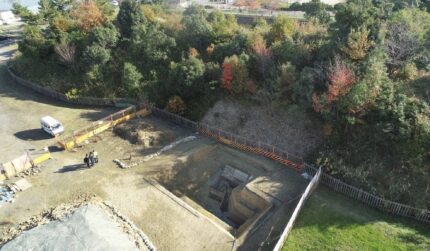