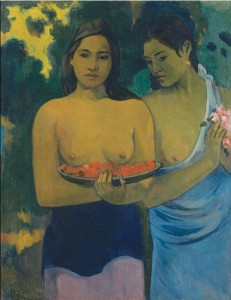 A crazy woman assaulted “Two Tahitian Women” by Paul Gauguin at the National Gallery of Art last week. Yelling and shouting, she pummeled the painting with her fists, grabbed it by the frame and tried to wrench it off the wall. A social worker from the Bronx tackled her, stopping the assault. Federal security officers attached to the museum immediately handcuffed and detained her.

The painting was protected by a plexiglass covering which she wasn’t able to penetrate, so there was no immediately visible damage to the art work. Curators took it off display to examine it thoroughly. Today they announced that the canvas is unharmed. There was some damage to the frame and the fittings that secured the painting to the wall, but according to Washington, D.C. Superior Court filings, it’s minor.

The court documents identify the attacker as Susan Burns, 53, of Alexandria, Virginia. She has been charged with attempted theft in the second degree and destruction of property, misdemeanor offenses to which she pleaded not guilty on Saturday.

According to court papers, Burns told an investigator: “I feel that Gauguin is evil. He has nudity and is bad for the children. He has two women in the painting and it’s very homosex­ual. I was trying to remove it. I think it should be burned. I am from the American CIA and I have a radio in my head. I am going to kill you.”

Not surprisingly, she’ll be getting a mental observation hearing Tuesday. This isn’t her first brush with the law. Her arrest record goes back to 1998, and she served time for assaulting a police officer and for conspiring to commit a carjacking.

The painting is on loan from the Metropolitan Museum of Art as part of the large 120-piece Gauguin exhibit that opened at the National Gallery in February. It’s a good thing she chose that particular painting because the Met requires that all their loaned out pieces be protected with the plexi shield. Neither of the paintings to the right and left of “Two Tahitian Women” have a protective covering.

The “Gauguin: Maker of Myth” exhibit will be at the National Gallery through June 5.

15 thoughts on “Crazy person attacks Gauguin painting for being evil”