The purported head of St. Vitalis of Assisi, a 14th century hermit and the patron saint of genital and urinary diseases, was sold at auction to an anonymous California phone bidder for €3,500 ($5,000). The estimated price range was between €800 (about $1,140) and €1,200 (about $1700), but as the news of the sale spread in the media — the words “patron saint of genital disease” have a lot of headline-making appeal — interest was piqued early. Auctioneer Damien Matthews received 100 bids before the sale even started, so the bidding opened well ahead of the top estimate at €2,400 (about $3,500). It took less than a minute for the Californian buyer to seal the deal at $5,000. 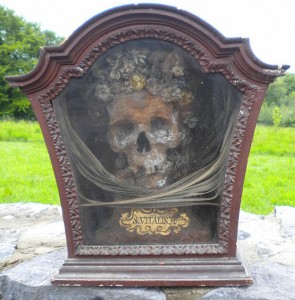 The skull is housed in a glass-faced Queen Anne case and belonged to the Anglo-Irish family of Annesbrook House in Duleek, County Meath, Ireland. The history of this macabre artifact is nebulous, but the story is that ancestors of the sellers acquired it on a Grand Tour of Europe during the 19th century and proudly set it in the entrance hall of Annesbrook House for all to see. Once they had children, however, they moved the head into an outbuilding where it gathered dust for decades. That’s where it was when Matthews found it while appraising articles for the upcoming sale.

As for the head itself, I don’t think it’s possible to confirm that it belonged to Saint Vitalis of Assisi, and in fact I think it’s more likely that it does not. The case is labeled “S. Vitalis M.” The “M” stands for martyr, and although there are several Saint Vitalises who died martyrs, the Assisi monk is not one of them.

He was a wayward youth, prone to brigandage and sins of the flesh, who saw the error of his ways and undertook to expiate his naughtiness by going on pilgrimages to the most important Christian sites in Italy, France and Spain. When he returned to his home in central Italy, Saint Benedict appeared to him in a dream and told him to follow his rule. Saint Benedict also got more specific and told him exactly which hermitage he should serve in.

He did as the dream told him and became a Benedictine monk assigned to the hermitage of Santa Maria of Viole, near the Benedictine monastery on the slopes of Mount Subasio, on the outskirts of Assisi. Vitalis lived there for 20 years in seclusion and poverty until his death. He wore rags and lived off the land. His sole possession was said to be a basket he used to carry water from a nearby spring. After his death on May 31, 1370 at 75 years of age, his body was buried on the spot. His reputation for saintliness drew many visitors who attributed miraculous cures to him. When he was canonized, May 31st was declared his saint day and he was made patron of genital and urinary diseases, perhaps because he had been more than passingly familiar with them in his youth.

A church was built in Viole over his burial. His body remained in that church’s crypt until 1586 when the bishop of Assisi had it moved to the Cathedral of San Rufino in Assisi. There an altar was dedicated to him in the right transept of the church, decorated with a painting of the Deposition from the Cross by Dono Doni (1562-3). The left transept has an altar dedicated to St. Rufino, decorated with Dono Doni’s Crucifixion. I suppose the bishop wanted to double up on local saint power. These chapels are on either side of the central altar of the cathedral, under which the remains of St. Rufino are interred. Saint Rufino brought Christianity to Assisi, was its first bishop and patron saint, and was martyred in 238 by having a stone tied to his neck and being thrown in the Chiascio river.

In 2001, the remains of Saint Vitalis were moved one more time, in a solemn procession from San Rufino back to the Cathedral of Viole where they were re-interred under the major altar. At no point in any of these moves was there any recorded comment on a missing head. That’s not to say it couldn’t have been snatched and sold to Anglo-Irish grand tourists, but as far as the locals are concerned, their saint is intact.