Archaeologists excavating the Vesuvius-blighted town of Herculaneum were thrilled to find a septic tank full of compacted ancient feces. When Vesuvius erupted in 79 A.D., the pyroclastic surge (fluidized volcanic gas and debris) that swept through the city carbonized organic materials in an instant, thus preserving things like wood and food which would otherwise have rotted. Then, once the surges cooled, they hardened, burying the town under 50-60 feet of volcanic rock. The organic materials continued to be protected from the elements for almost 2000 more years.

Herculaneum has thus been a unique source of information about Roman life. Human excrement provides a particularly thorough snapshot of how people lived: what they ate and what sort of illnesses and parasites they were prone to. The city sewers are small, though. One of the main ones that is thought to have served the public baths and several wealthy private homes is a mere 24 inches (60 centimeters) wide and 3.3 feet (1 meter) high. There’s another of similar dimensions running under one of the north-south streets. In order for archaeologists to explore them and to make them usable again for water drainage, those slender sewers were cleared with pressure hoses. 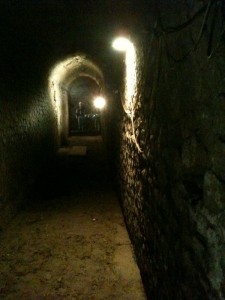 Under a third street, however, they found a far larger tunnel, this one almost 12 feet high (3.6 meters) and 282 feet (86 meters) long. That meant the team could clear that sewer by hand instead of by hose, and archaeologists love nothing more than tunneling through 12 feet of ancient poop. There was over a foot and a half of organic waste deposited along the full 282-foot length of the tunnel. It’s not so much a sewer — it didn’t drain into the sea like the small tunnels did — as a septic tank that collected refuse dropped from garbage chutes connected to the sewer from the apartment buildings, homes and shops on the street above.

The residents would drop all their common household waste, from the contents of commodes to food scraps to broken pottery, down the shaft into the sewer. Archaeologists were immediately able to get an idea of some of the foods eaten by the residents of Herculaneum in the days right before the disaster by looking at the identifiable detritus — like cherry pits and fig seeds — in the top layer of excrement. They eventually collected over 750 bags of excrement from the walls of that septic tank, and have spent the past few years analyzing it.

Close scrutiny of the composted human waste has revealed that the estimated 150 middle- and lower-class inhabitants of the three-storey block of flats had a much more varied diet than previously thought.

They regularly feasted on fish, spiky sea urchins, figs, walnuts, eggs and olives, using the olive pips as fuel in their homes.
Each apartment’s kitchen and latrines was linked to the septic tank via waste disposal chutes, down which households would chuck broken plates, cups and other everyday items. […]

“What we’ve found is a fantastically good snap shot of what the Romans were using in their kitchens, from pots and pans to glass ware and broken cups,” said Andrew Wallace-Hadrill, the director of the Herculaneum Conservation Project.

They found 170 crates of artifacts including pottery, jewelry and coins, but it’s the poop that’s the greatest treasure of them all, indicating that even the commoners of ancient Herculaneum ate an exceptionally varied diet rich in fiber, seafood, fruit and vegetables.

For an entertaining jaunt through Herculaneum past and present, check out PBS’ Secrets of the Dead: Herculaneum Uncovered. At around the 35 minute mark there are some amazing shots of the organic items that survived, like a beautifully inlaid wooden bed and a loaf of bread that looks like you could dust it off and eat it right now, followed by a glimpse into the sewer that has provided archaeologists with so much lovely crap to sift through.