Divers doing an inventory of underwater archaeological sites off the coast of Pantelleria, an island in the Straights of Sicily between Sicily and ancient Carthage (modern Tunisia), have found almost 3500 bronze Punic coins lying in the sand.

The inventory project started in June, with divers exploring the sea off the Cala Tramontana (the east coast of the island) in order to create an itinerary for scuba tourism. They expected to see ancient artifacts, especially ceramics and amphorae which the area is known for, but the enormous quantity of coins was unexpected. They first discovered just a few hundred Punic coins (already an immense treasure, of course), but then day after day they just kept finding more until they reached 3,422.

All the coins were minted between 264 and 241 B.C., the exact dates of the First Punic War, and they all have the same iconography: the Carthaginian fertility goddess Tanit wearing a wreath of wheat on the obverse, a horse’s head flanked by symbols like a star, letters and a caduceus on the reverse.

The coins were scattered on the sea floor relatively close to shore. There was no container or cache. Divers retrieved every individual coin by hand.

“Since all coins feature the same iconography, we believe that the money served for an institutional payment. Indeed, ordinary commercial transactions contain different kind of coins,” archaeologist Leonardo Abelli, director of the excavation, told Discovery News.

According to Abelli, the money, carried on a Carthaginian ship headed to Sicily, was destined to an anti-Roman movement. But something might have gone wrong during the navigation.

“They decided to hide the treasure on the bottom of the sea, in relatively low waters, in the hope to recover it later. Indeed, near the coins we found a large stone anchor,” Abelli said. 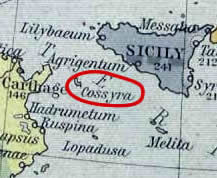 Pantelleria, called Cossyra in antiquity, was settled by Carthage in the early 7th century B.C. Its proximity to both Carthage and Sicily made it a valuable way station for Carthaginian shipping. The Roman Republic conquered the island in 255 B.C. during the First Punic War, but lost it again the next year. In accordance with the terms of the 241 B.C. Treaty of Lutatius, the peace treaty that ended the war, Carthage evacuated Pantelleria along with most of Sicily and the other islands in the Straights (Linosa, Lampedusa, Lampione and Malta).

Rome would eventually reclaim the island in 217 B.C., a year after Carthage sent Hannibal and his elephants over the alps starting the Second Punic War. Later, the rugged, windy island would see use as an exile destination for scofflaws of high rank and members of the Imperial family.