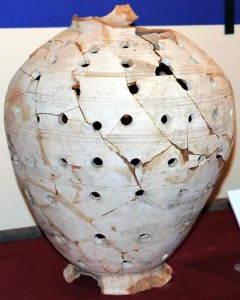 An ancient Roman jar of mysterious origin and even more mysterious function has stumped experts. It was discovered broken in 180 pieces in the storage room of the Museum of Ontario Archaeology, and was recently painstakingly put back together. Once the vessel was whole again, researchers were surprised to find that it is riddled with holes all over the sides and even one on the bottom.

The museum has contacted experts in Roman pottery asking if they’re familiar with this form, but nobody has seen another example. Speculation is rife as to how the jar might have been used.

“There are a lot of different options, a lot of them involving either a lamp or some sort of animal container,” [Museum of Ontario Archaeology researcher Katie] Urban said, adding that while the tiny holes would’ve allowed light to pass through the object, the hole at its bottom suggests it wasn’t a lamp.

Another possibility is that the jar was used to store dormice, rodents found throughout Europe; ancient texts suggest the mice were a popular snack for Romans. […]

Urban said the problem with this theory is that dormice jars from elsewhere in the Roman world look different from this vessel. The rodent jars were equipped with a ramp that mice could run along and use to help store food within the holes.

Yet another idea is that the jar held snakes, ones too big to slither out through its holes. Snakes were a popular religious symbol throughout the ancient world.

If we knew more about its archaeological context, we might be able to plug the holes, to coin a phrase. Unfortunately, we don’t know where the sherds were found. Museum records suggest the collection of broken jar pieces was donated to the museum by pioneering Welsh archaeologist William Francis Grimes, director of the Museum of London and the University College London’s Institute of Archaeology, in the 1950s. Grimes is most famous for having unearthed the London Mithraeum in 1954 while surveying a bomb site in central London, but the Museum of Ontario Archaeology has no indication that the jar was found on that famous dig.

Since the inventory of Grimes’ gifts to the museum is incomplete, it’s possible that the jar isn’t even from Roman Britain, but rather from Ur. The British Museum gave a collection of artifacts from Leonard Woolley’s excavation of the royal burials at Ur to the Ontario museum in 1933. This is unlikely, however, so the museum’s working assumption is that the holy jar is Roman.

I think it looks a little like one of those pots used to grow strawberries. Those have holes in the bottom for drainage and in the sides for the plants to grow out of. The holes look too small for that use, though.