In 1958 mountain climber and explorer Peter Byrne was in Nepal on the second year of a three year Yeti-seeking expedition funded by adventurer, philanthropist and oil millionaire Tom Slick Jr. In a Buddhist monastery in Pangboche, a small village in the Sola Khumbu region of the central Himalaya, Byrne learned from a temple lama that the monastery just happened to have the hand and skullcap of a Yeti. The custodian showed him a large, crusty, oily, blackened hand with curled fingers and long fingernails.

Byrne asked if he could have it but the lamas refused because its loss would lead to great misfortune for the monastery. Eventually he negotiated a bargain: he could take one of the fingers as long as he replaced with a reasonable facsimile and made a donation towards the upkeep of the temple.

Byrne cabled the information to Tom Slick Jr. and Slick had Byrne return to London to consult with primatologist Dr. Osman Hill. Slick, Byrne and Dr. Hill met for luncheon at the Regents Park Zoo. During a discussion of how they would secure an appropriate replacement finger, Hill upended his bag and dumped a dried human hand onto the table. Problem solved.

Byrne returned to Pangboche with his replacement hand and ten thousand rupees (about $160.00 at today’s exchange rate) to donate to the temple. He cut off the index finger from the Yeti hand and wired the human finger in its place. The next obstacle to overcome was the illegality of smuggling a historical artifact out of the country. So Byrne gave the Yeti finger to Jimmy Stewart to smuggle out of India in his wife’s lingerie case.

Yes that Jimmy Stewart. Jimmy Stewart was a personal friend of Tom Slick’s and just happened to be in India in December of 1958 on a tiger hunt. When Byrne got word to Slick that he had secured the Yeti finger, he cabled Byrne telling him to take it to the Grand Hotel in Calcutta where a Mr. and Mrs. Stewart would take custody of the article and smuggle it to Dr. Hill in London. They hid it in Gloria’s lingerie suitcase (rich ladies had dedicated suitcases for their unmentionables in those days). When they arrived, guess which bag was lost? Two days later a customs agent showed up at their hotel with the lingerie case in hand. Gloria asked if they had opened it and the customs agent assured her they would never paw through a lady’s delicates. 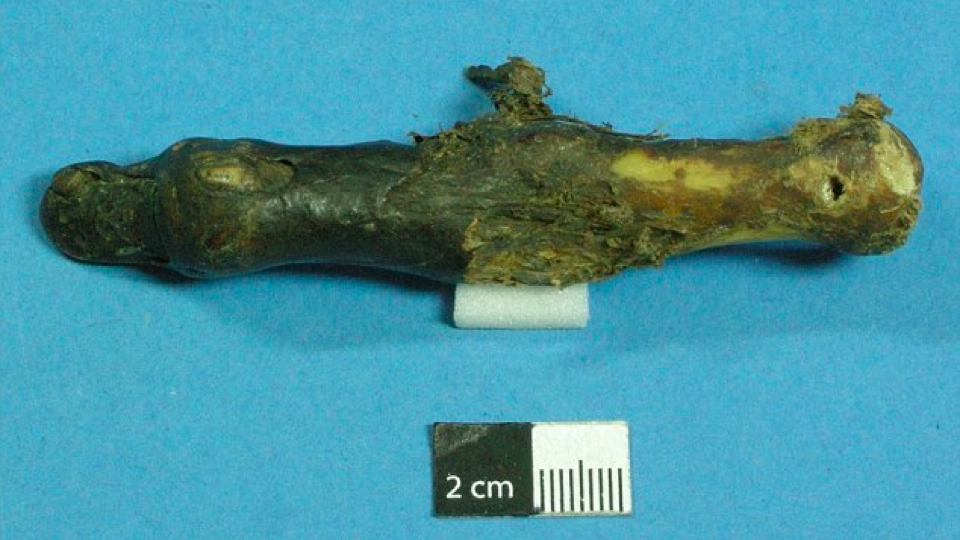 Thus the finger made its adventurous way to Dr. Osman Hill. He examined it and declared it the finger of a hominid of some kind, he couldn’t be sure of which kind. When Hill died in 1975, he bequeathed his collection of research specimens to the Royal College of Surgeons’ Hunterian Museum (the same museum where the Irish Giant’s bones are on display).

Hill’s collection wasn’t well catalogued and didn’t have immediate research value so it was stored and pretty much forgotten about until 2008 when curators going through the Hill collection found a box containing a plaster cast of a large footprint, some hair, scat samples and a large, blackened finger. Hill’s notes identified it as a Yeti finger from Pangboche Temple in Nepal.

Scientists have more tools than Hill did to determine just what creature once pointed that index finger, namely DNA analysis. The Royal College of Surgeons allowed a small sample to be taken to find out once and for all if it is a Yeti’s digit.

The finger is of human origin, according to Dr Rob Jones, senior scientist at the Zoological Society of Scotland.

“We have got a very, very strong match to a number of existing reference sequences on human DNA databases.

“It’s very similar to existing human sequences from China and that region of Asia but we don’t have enough resolution to be confident of a racial identification.”

BBC radio followed the story, interviewing Peter Byrne, now 85 years old and living in the United States. You can listen to the program here. There’s some discussion at the end of the broadcast about sending the finger back to Pangboche. The original hand was stolen in 1999 after a 1991 episode of Unsolved Mysteries analyzed a sample from the finger (results were inconclusive) and made the Pangboche monastery a newly popular location for cryptozoological tourism.

The income from tourism plummeted after the theft. Mike Allsop, an Air New Zealand pilot and Everest mountaineer, created a replica of the hand and skullcap to donate to the monastery in the hope that it would give them something to show tourists and perhaps inspire the return of the purloined Yeti parts. Getting the original finger back would mean a lot to the monastery.